“A magnificent, opulent, tremendous, stupendous, gargantuan, bedazzlement, a sensual ravishment. It will be: Spectacular Spectacular” are the words Harold Zidler, the owner of the Moulin Rouge (the movie), would use to descibe Cirque Dreams and Dinner, the theatrical dining experience onboard Norwegian Epic.

We were surprised  to find a venue with a Dutch/Flemish name on a cruise ship. When we learned that the original Spiegeltents (‘mirror tent’) were constructed in the Flemish part of Belgium, in the late 19th and early 20th century as mobile dance halls, we felt quite proud.

Advertised as “the first big top at seas” the Spiegel Tent has a circus look with its tent-like ceiling. 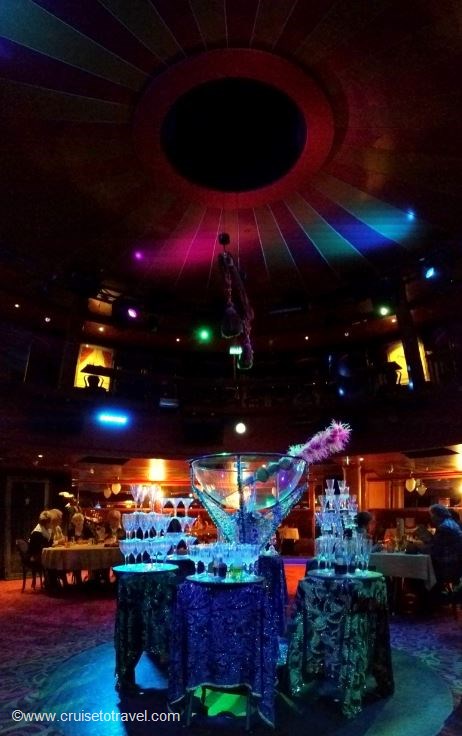 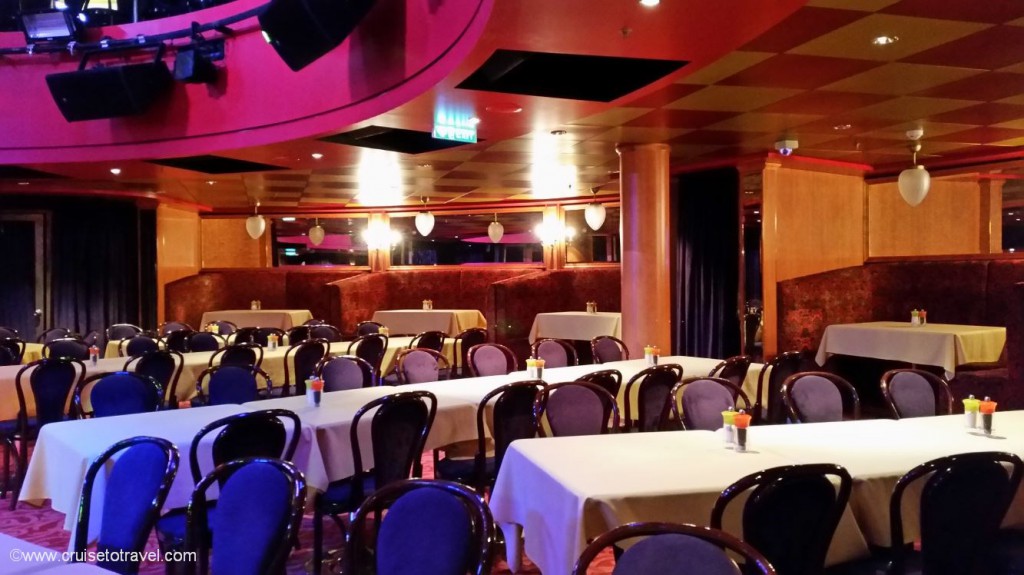 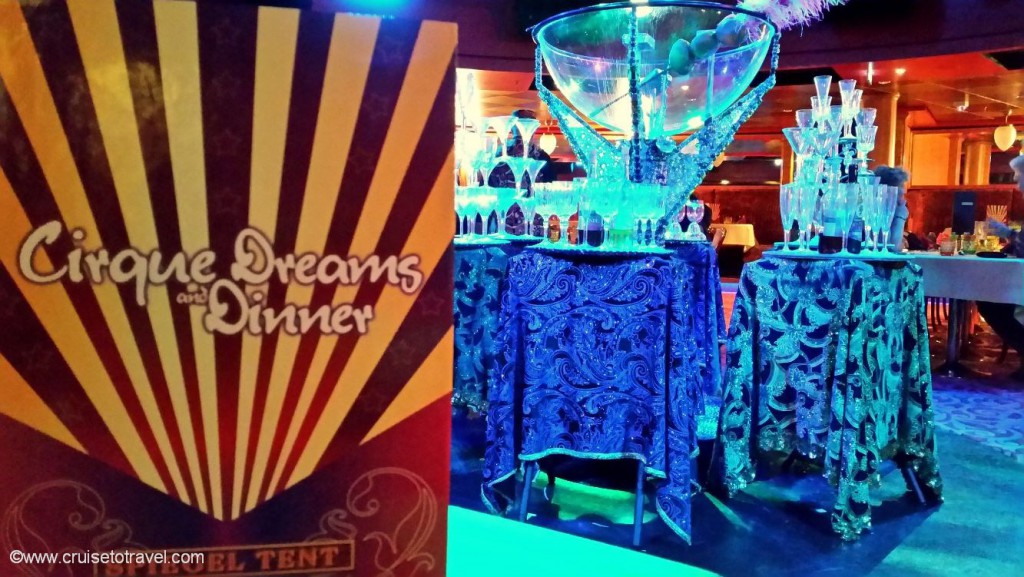 Dinner, in the form of a set menu, is served while the artists perform in the center of the Spiegel Tent.

The three course meal is really good but not exceptional. But since the meal is not the main attraction of the evening we didn’t really see that as a problem. After all we were paying more attention to what was happening around us than what was under our nose.

The energetic show, once it starts it doesn’t slow down, features brightly costumed acrobats, fliers and clowns performing in front of, around and over the dinner tables.

Acts include a female contortionist doing amazing things is a super-sized champagne glass, acrobats performing balancing acts, aerialists flying over your head, clowns clowning around and some selected members of the audience participating…. 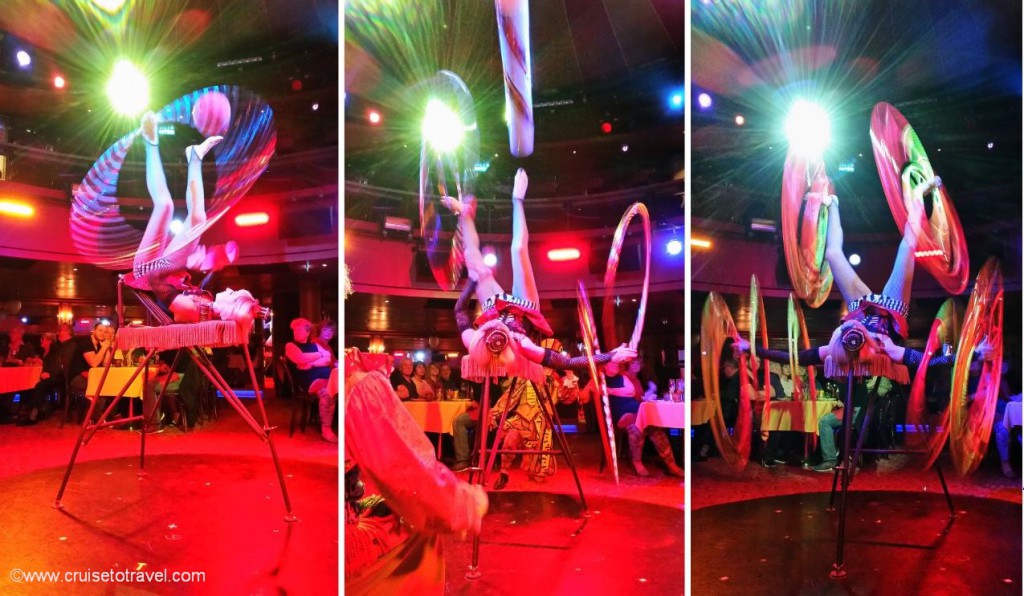 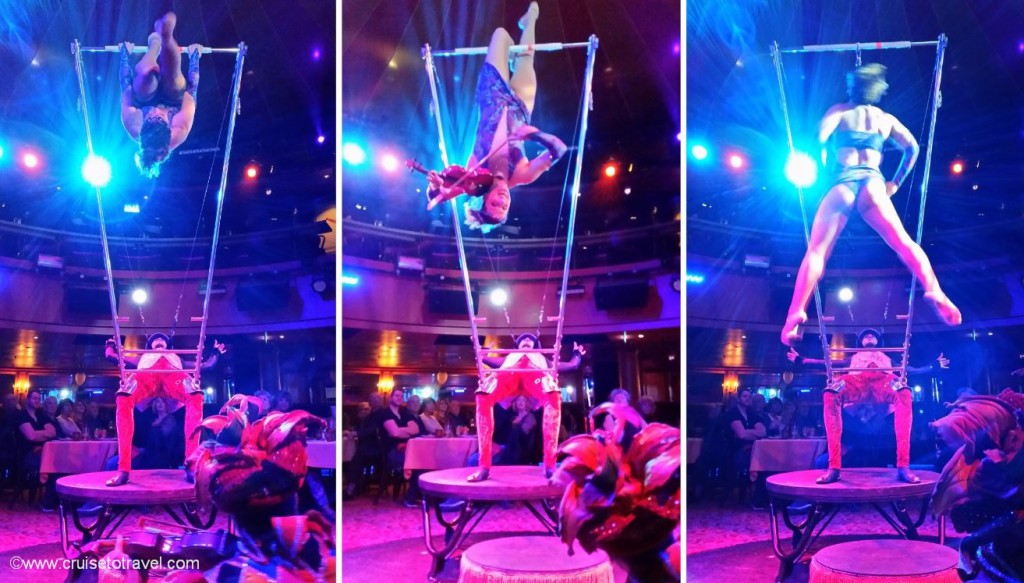 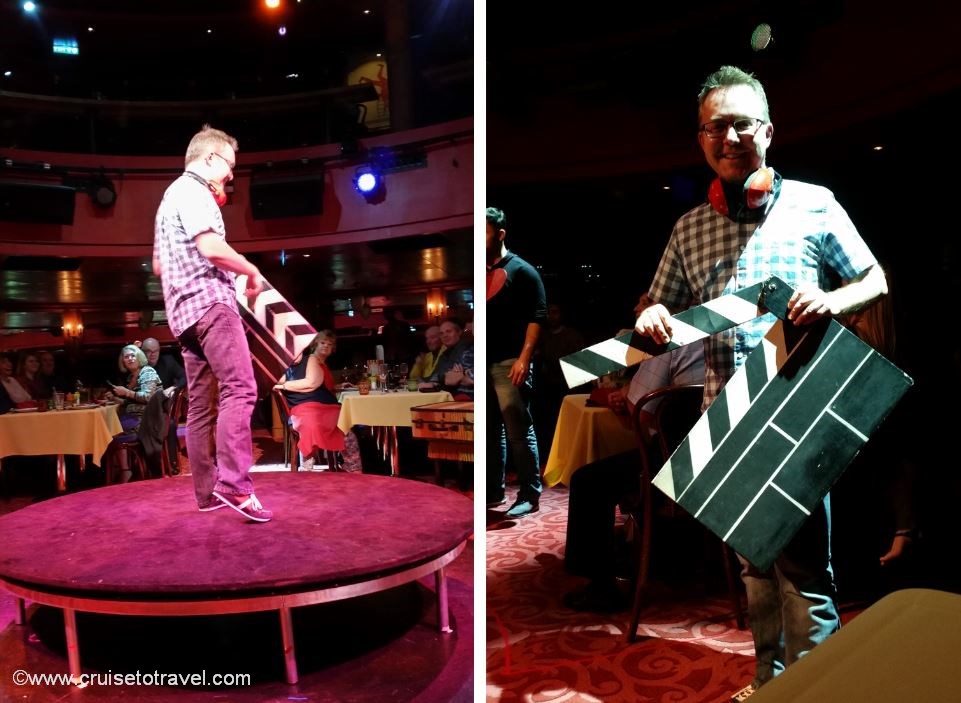 It’s a good thing to keep in mind that great things don’t come cheap. The cover charge for standard seating (at the back, on the ground floor) is $29,99 while getting up close and personal with the action will set you back $39,99. In combination with a specialty dining package, the cruise line will charge you $10 for the regular seats and $15 for the premium seats.

Though we initially did not plan to book the Cirque Dreams and Dinner extravaganza, we decided that, in combination with the specialty dining package which was included in our cruise package, the (smaller) additional fee should not hold us back from going to the “circus”. After two hours of non-stop entertainment I can honestly say this was one of the best decisions on this cruise.

The Cirque Dreams and Dinner “show” is an unforgettable, one-of-a-kind theatrical dining experience that you can only enjoy onboard Norwegian Epic (and Norwegian Breakaway).