With Celebrity Edge less than three months from its first official sailing, Celebrity Cruises has completed the final chapter of the ship’s transformational design story, with the reveal of iconic spaces designed by renowned designers, Patrick Jouin and Sanjit Manku of Jouin Manku Studio. This includes the stunning space that will become the beating heart of the year’s most anticipated new ship, The Grand Plaza, yet another venue designed to break from traditional cruise ship thinking and shatter all expectations. 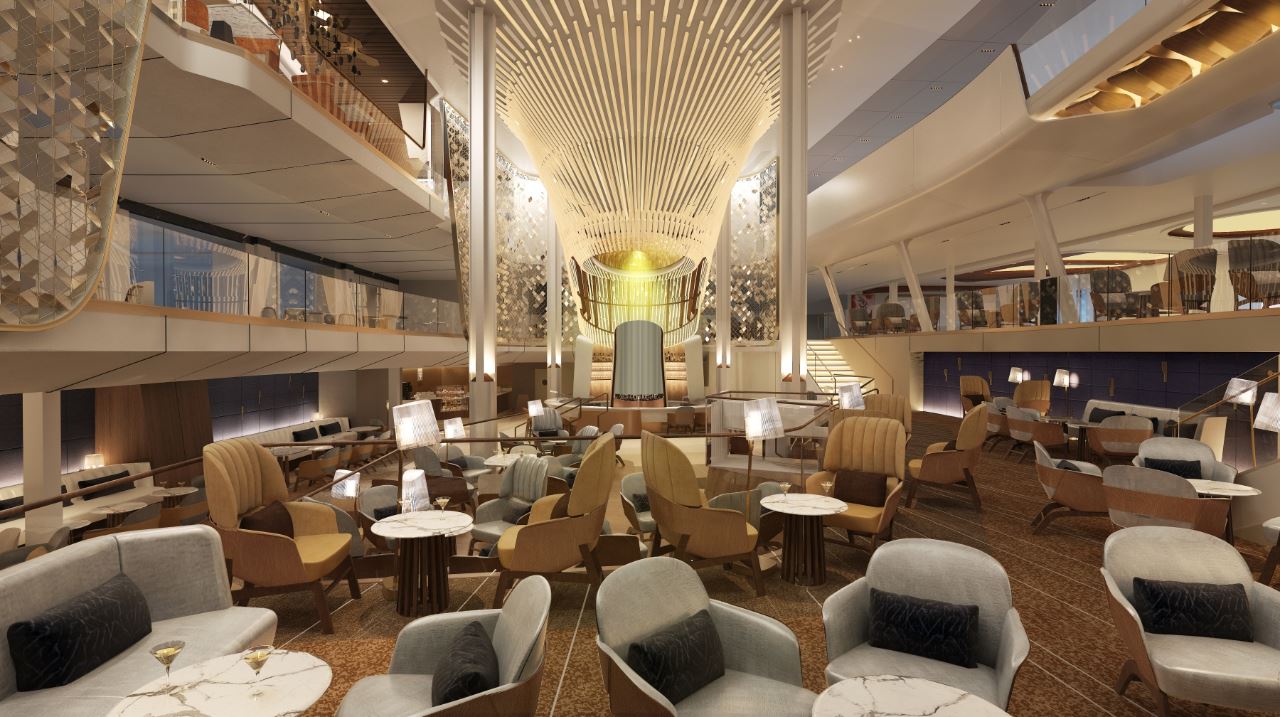 Mixing simplicity and modernity, The Grand Plaza takes inspiration from the glamourous days of transatlantic travel. At a time when cruise ships were at the heart of chic society, the center of these ships were traditionally spectacular ballrooms, accented with dramatic staircases and ornate chandeliers. They were social places to meet, greet, dine, drink and dance. The Grand Plaza pays homage to these powerful historic spaces and reinterprets them for the 21st century.

Spanning three decks at the heart of the ship, The Grand Plaza acts as the epicenter of Celebrity Edge, which radiates an energy that lures guests throughout the day, as it transforms both physically and atmospherically. Guests are drawn to the space by The Chandelier, a striking lighting feature – and art installation – that rises over the Martini Bar to the ceiling three decks above. Composed of five levels of 765 blades illuminated by dynamic LED strips that change color from day to night, The Chandelier weighs in at seven tons. 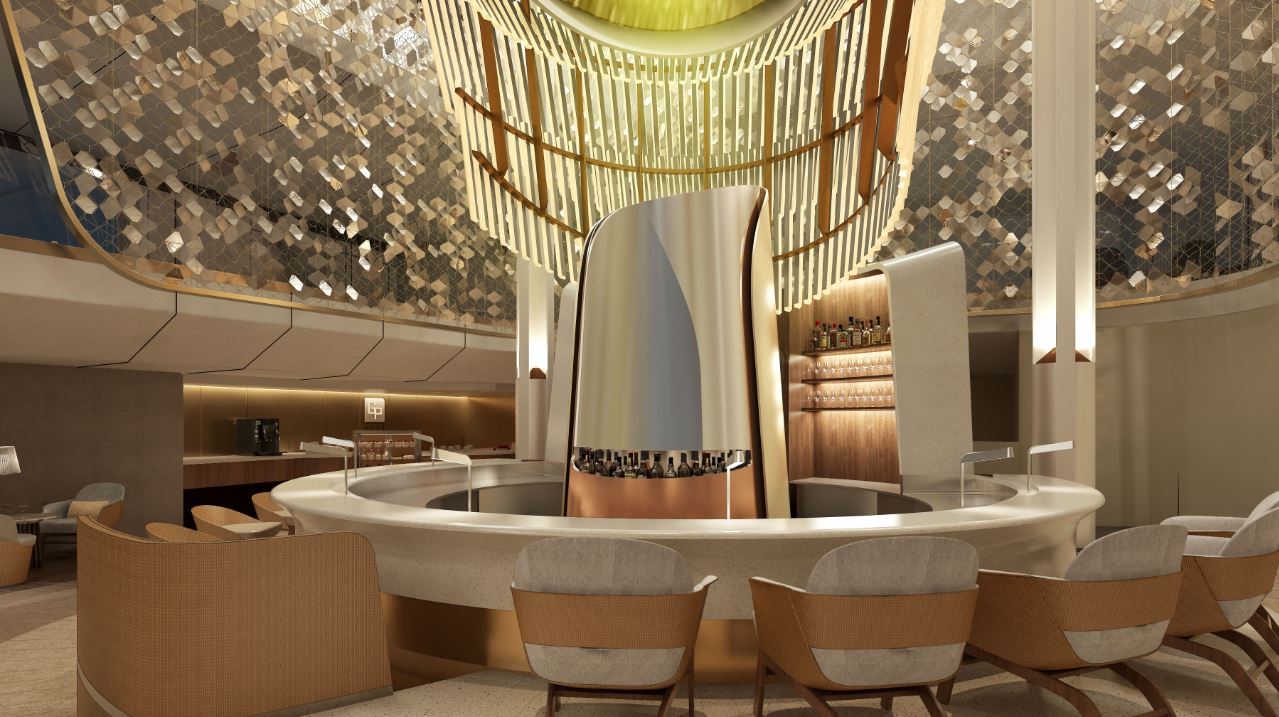 Here, guests will be transported to the lively piazzas of Italy, of which this sprawling 5,167 sq. ft. space was also inspired. Home to many of the incredible new specialty restaurants – including Raw on 5 and Fine Cut Steakhouse on Deck 5; Le Grand Bistro and Café al Bacio on Deck 4; and the new Grand Plaza Café on Deck 3 – The Grand Plaza truly is a grand space. At its center, on Deck 3, guests will find the breathtaking next evolution of the always-buzzing Martini Bar, one of the most popular venues across Celebrity’s fleet. Adorning the edges of The Grand Plaza are intricately hand-stitched mesh screens, combining more than 13,500 pieces of metal, leather, and fabric. 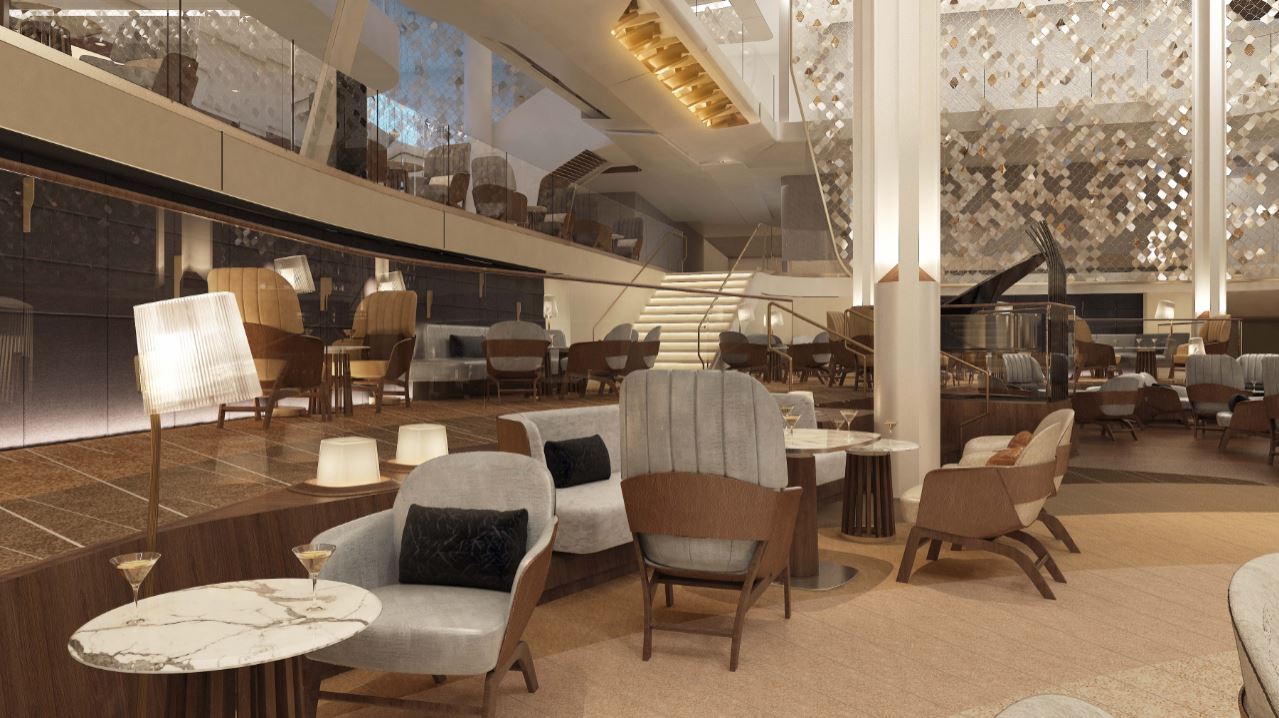 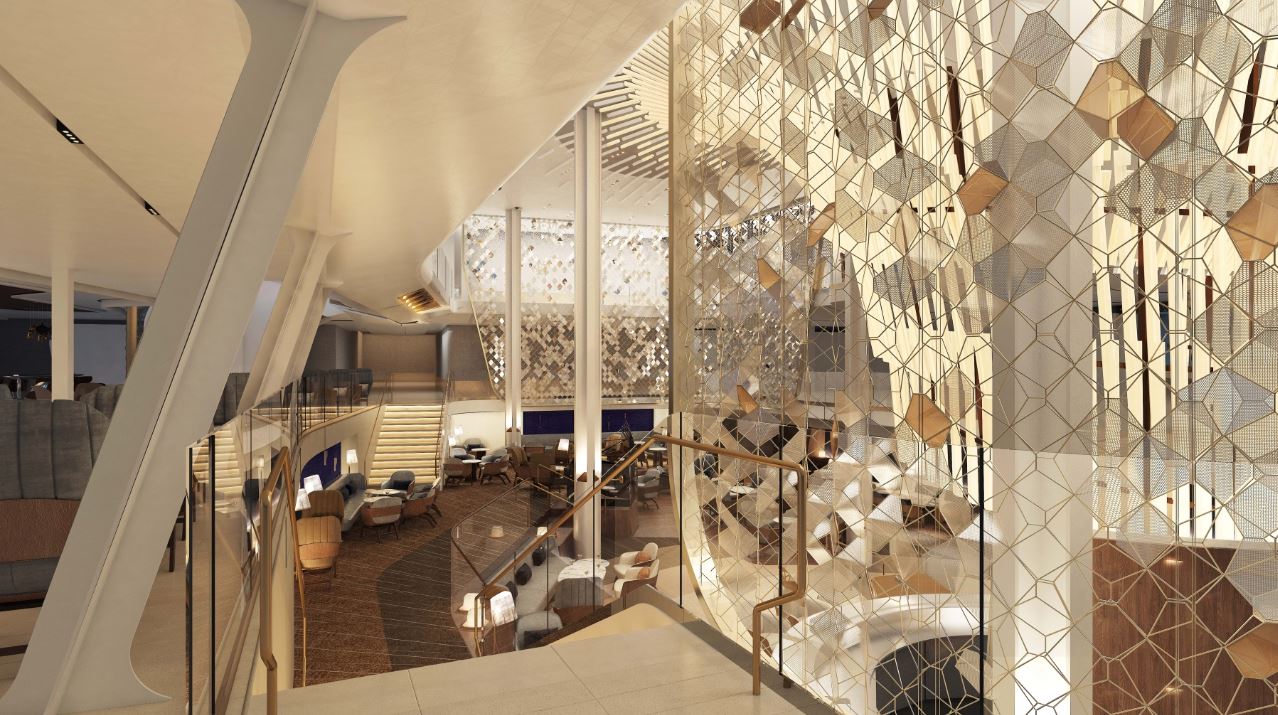 In the morning, The Grand Plaza invites guests to enjoy a cappuccino and a croissant at either of the cafés. Guests can return to The Grand Plaza for afternoon tea or to indulge in a pre-dinner cocktail while enjoying unexpected pop-up performances. At nightfall, the energy transforms completely, and the space becomes the social epicenter of the ship, coming alive with live music.

While the Grand Plaza remains a highlight of Jouin Manku’s involvement in the design of Celebrity Edge, their influence can be felt throughout the ship.

Inspired by the thousands of hands that go in to the construction of a ship – such as Jouin’s grandfather, who was a welder in the construction of the S.S. Normandie – Jouin Manku designed the exposed corridor. Complete with authentic welders’ touches, architects’ markings and engineers’ notes, the exposed corridor uncovers the bare hull of the ship leading to and from The Grand Plaza and the main dining rooms. The space transforms depending on the direction a guest is walking, like a life-sized lenticular wall. One way, guests will see the unadorned beauty of the ship’s steel bones, while heading in the other direction guests will see a sleek, modern design that starkly contrasts the alternate view. 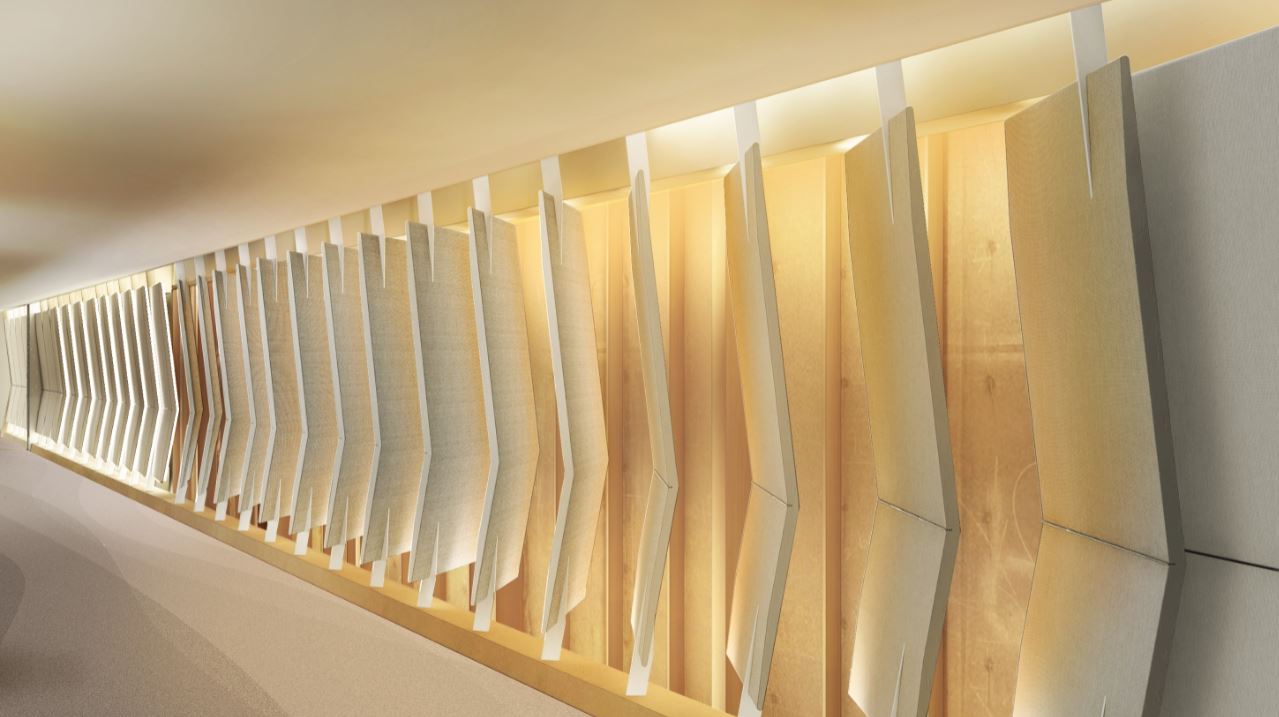 Jouin Manku’s influence is also strikingly apparent in the Main Dining Atrium, where they’ve taken the concept of a staircase and turned it into a work of art. Hanging three stories between the flights of stairs is yet another meaningful art installation known as The Pendulum. The Pendulum base moves ever so gently to the rhythms of the ocean to remind guests that they are indeed moving and connected to the sea, even when they cannot see it. 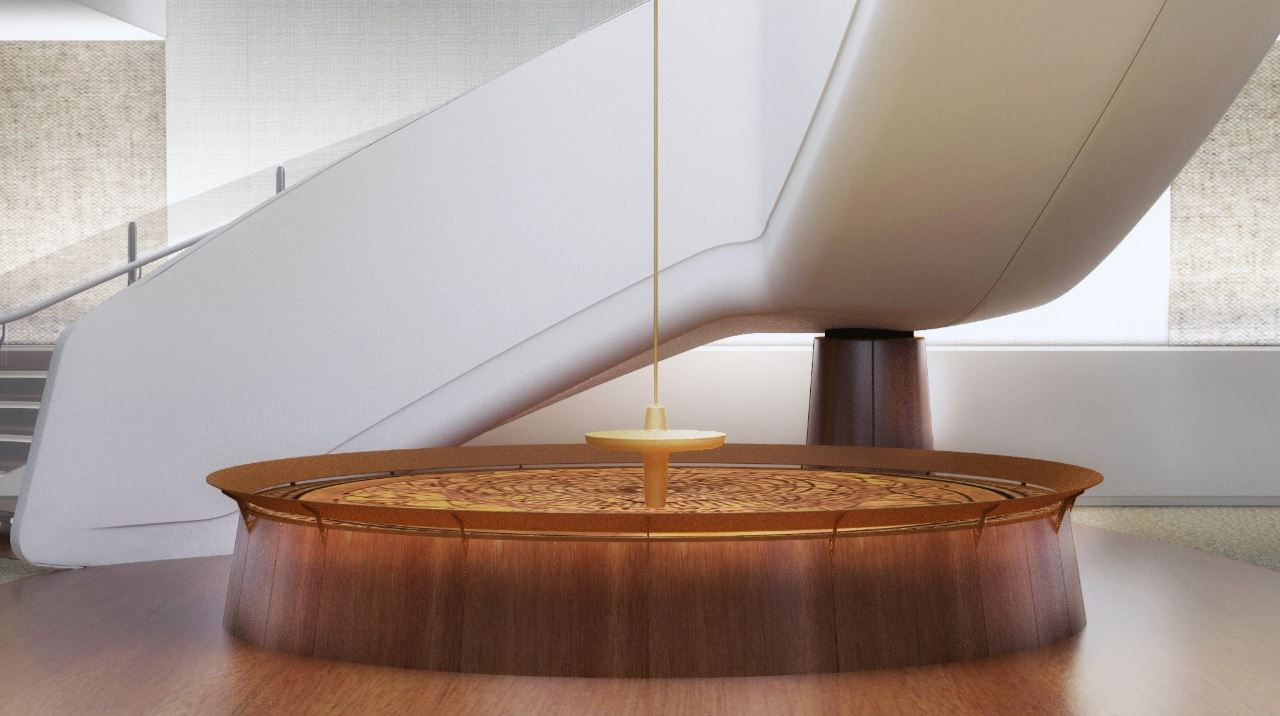