After 18 months of construction Norwegian Cruise Line has taken delivery of  Norwegian Bliss. The 168,028 gross ton cruise ship is currently on her way to New York City. 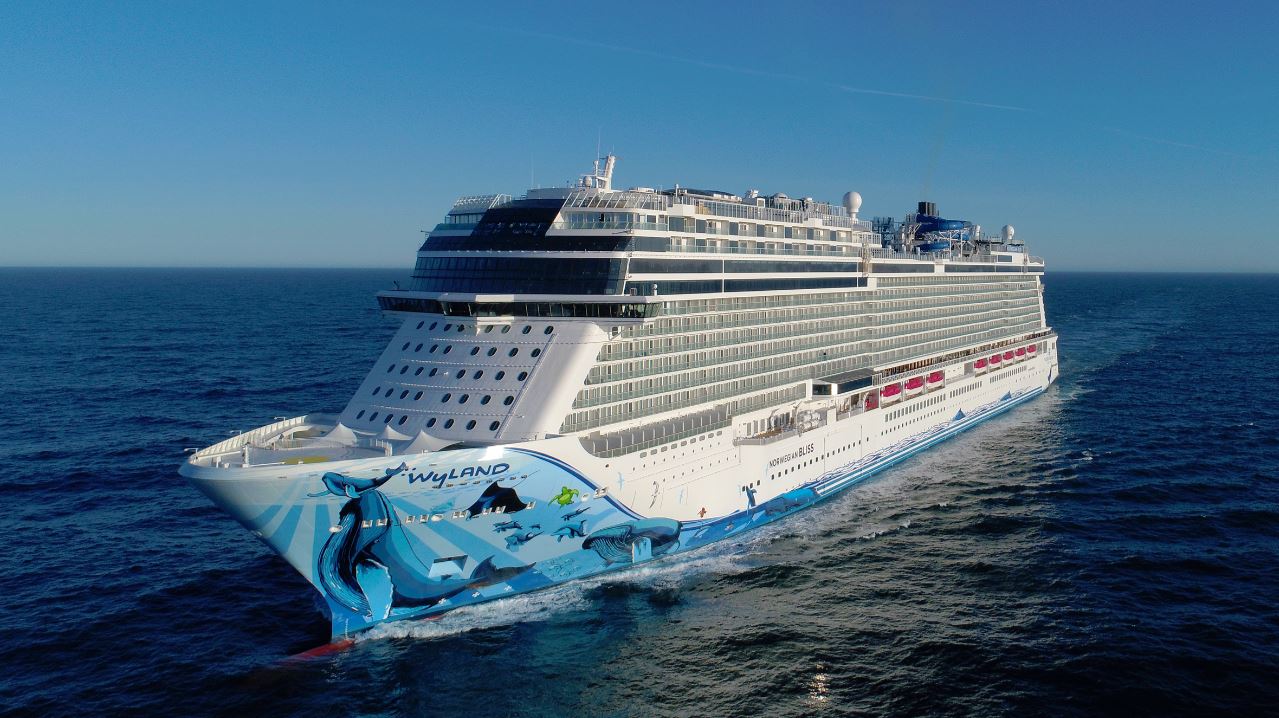 Upon her arrival to the U.S. on May 3, the festivities for her U.S inaugural tour will commence with two-night preview events in New York, Miami, and Los Angeles, and will conclude with a grand christening ceremony and sailing from her first homeport at Pier 66 in Seattle, Washington on May 30. Following a three-day inaugural voyage with a call into the port of Victoria, British Columbia, she will return on June 2and will then embark on her first seven-day voyage to Alaska.

Norwegian Bliss, the third ship in the line’s Breakaway Plus class, is the first cruise ship specifically designed with features and amenities for the ultimate Alaska cruising experience. On board, guests will be able to experience their favorite amenities plus some new first-at-sea offerings.

The crown jewel of these features is an incredible 180 degree Observation Lounge,located at the front of the ship on deck 15. Spanning 20,000 square feet, the sprawling Observation Lounge will be a breath-taking experience, offering floor-to-ceiling windows that will be the perfect spot from which to take in the stunning sunset views of the beautiful islands of the Caribbean during her winter season or the awe-inspiring glaciers and vistas of Alaska in the summer.

Norwegian Bliss will thrill and excite guests with the largest competitive race track at sea, a first for any North America-based cruise ship. The two-level electric-car race track sits at the top of deck 19 offering guests amazing views while twisting and turning at a speed of up to 30 miles per hour.

After a thrilling ride, guests can then test their agility at the open-air laser tag course, or race side-by-side on the Aqua Racer waterslide at the expansive Aqua Park, with two multi-story waterslides, one of which extends over the edge of the ship and loops down to the deck below.

Aboard Norwegian Bliss, culinary enthusiasts can savor new exclusive specialty dining and bar concepts such as the debuting Texas Smokehouse, the cruise line’s first full-service Starbucks store at sea and Coco’s – a chocolate and sweet treats shop. Other signature à la carte restaurants include the tastes of Tuscany at La Cucina and the finest fresh seafood at Ocean Blue.  At The District Brew House, guests can enjoy a variety of craft cocktails and beers, including local Seattle favorites from Red Hook Brewery.

Norwegian Bliss features incredible entertainment including the Tony Award-winning Broadway musical, Jersey Boys, and ¡HAVANA! – an original musical theater show created and produced specifically for Norwegian Bliss. Norwegian Bliss also features a new theatrical cocktail hour experience, Happy Hour Prohibition – The Musical that will transport guests to a New Orleans speakeasy on the eve of the Prohibition era. At The Cavern Club, guests can enjoy their favorite songs from The Beatles live with a talented cover band, in a setting inspired by the Liverpool Club where The Beatles famously performed countless times.

Guests on Norwegian Bliss can relax with a variety of accommodations including luxurious suites in The Haven by Norwegian, studio staterooms for solo travelers with virtual ocean views and plenty of connecting staterooms ideal for large groups and families. Two expansive observation lounges, one exclusively accessible for Haven guests, will offer cruisers uninterrupted views of the natural beauty of the sea and shore throughout their journeys.

Beginning June 2018, Norwegian Bliss will spend her summer cruising seven-day voyages to Alaska, and fall season cruising to the Mexican Riviera from Los Angeles.  In winter of 2018, she will sail the Caribbean from Miami, and in the 2019 fall/winter season she will cruise from New York City to Florida, the Bahamas and Caribbean.