Norwegian Cruise Line has unveiled further details on Norwegian Bliss. Norwegian’s newest cruise ship, which is currently being constructed at Meyer Werft in Germany, will feature the largest race track at sea, original new dining concepts, heart-racing waterslides that round the side of the ship and much more.

The ship’s exciting new features will join the brand’s signature elements of freedom and flexibility that Norwegian is known for including a myriad of dining options and a vibrant onboard atmosphere fuelled by a multitude of bars and lounges, award-winning youth programs and more. The ship’s amenities were announced by Andy Stuart, Norwegian Cruise Line president and CEO in Las Vegas. 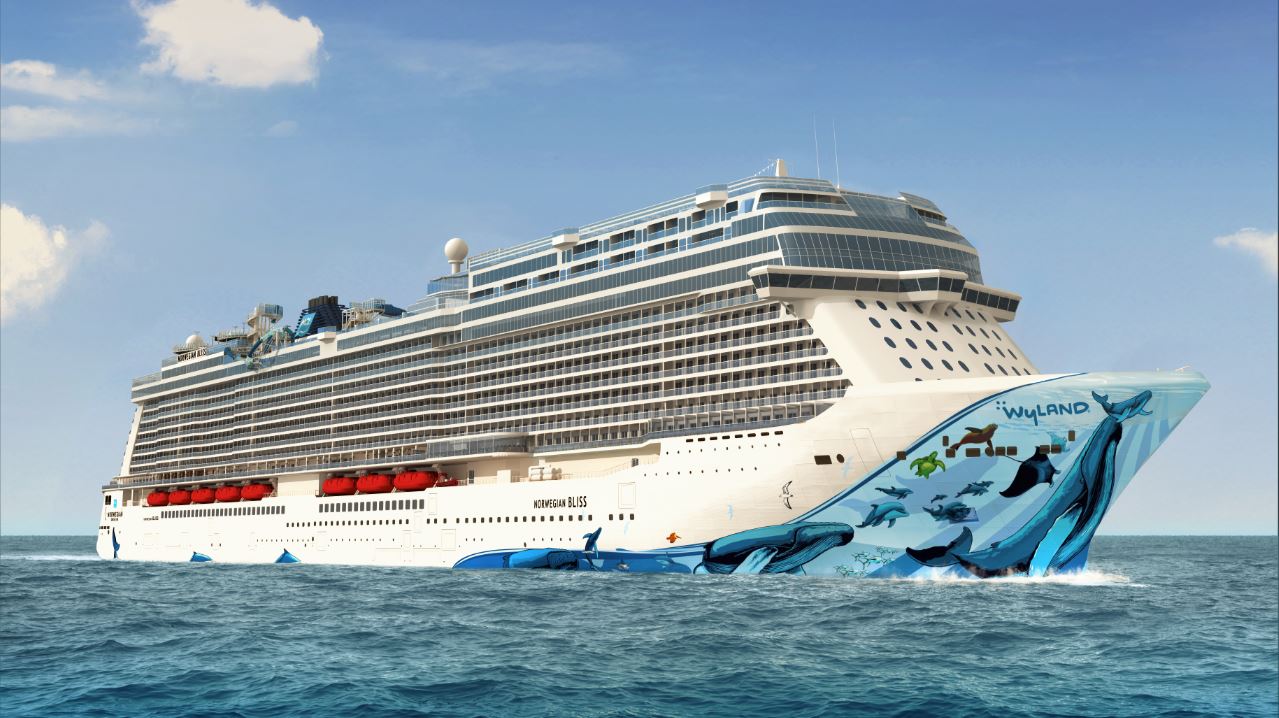 “Norwegian Bliss will no doubt be our most incredible ship to date. We have elevated Norwegian Bliss’s onboard experience to new heights, bringing the best features from across our fleet plus exciting new first-at-sea activities like the largest race track and new dining concepts to create the ultimate cruising experience.” – Andy Stuart

Following the popularity aboard Norwegian Bliss’ sister ship in China, Norwegian Joy, guests will be able to put the pedal to the metal with a two level electric-car race track. The competitive track, the longest at sea at nearly 1,000 feet, will rev up the hearts of all who race around her many twists and turns with four speed settings accommodating novice, intermediate and advanced drivers, reaching up to 30 miles per hour – with a special “turbo boost” available on each lap. 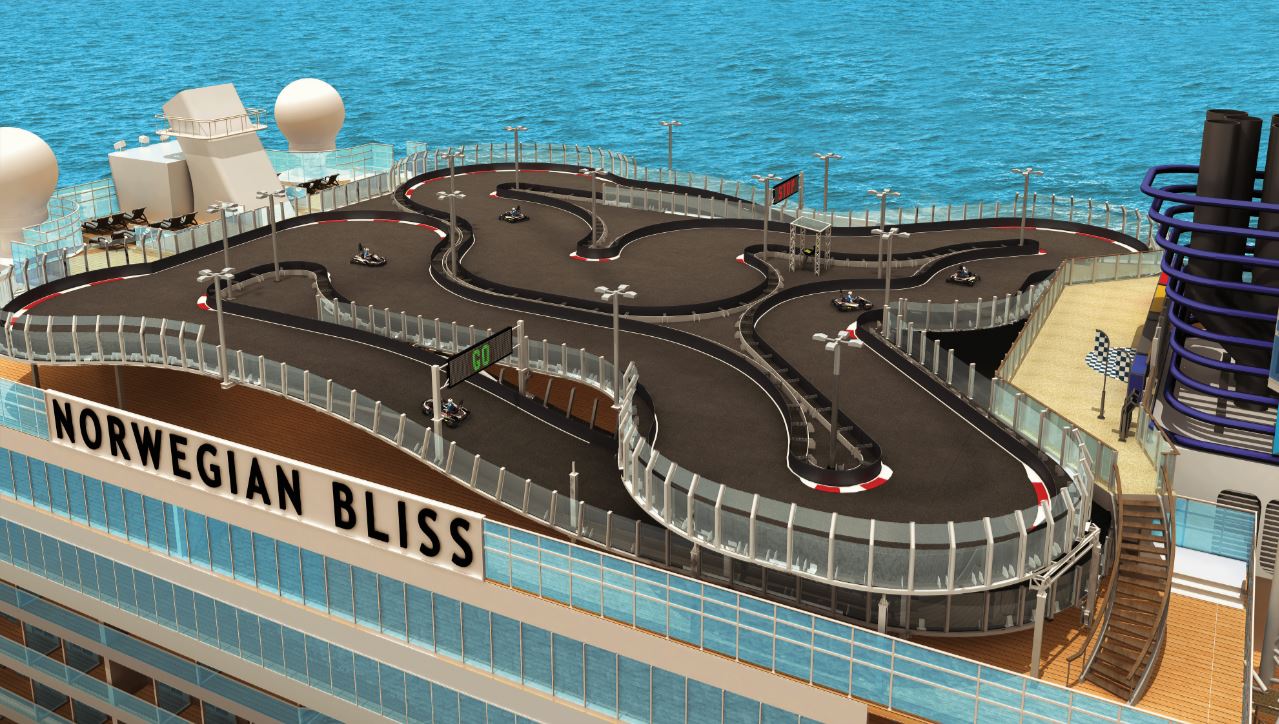 At the open-air laser tag course guests will be able to test their agility. Themed as an abandoned space station, the course will come to life both day and night as guests go into stealth-mode and compete against family and friends with state-of-the art laser guns. 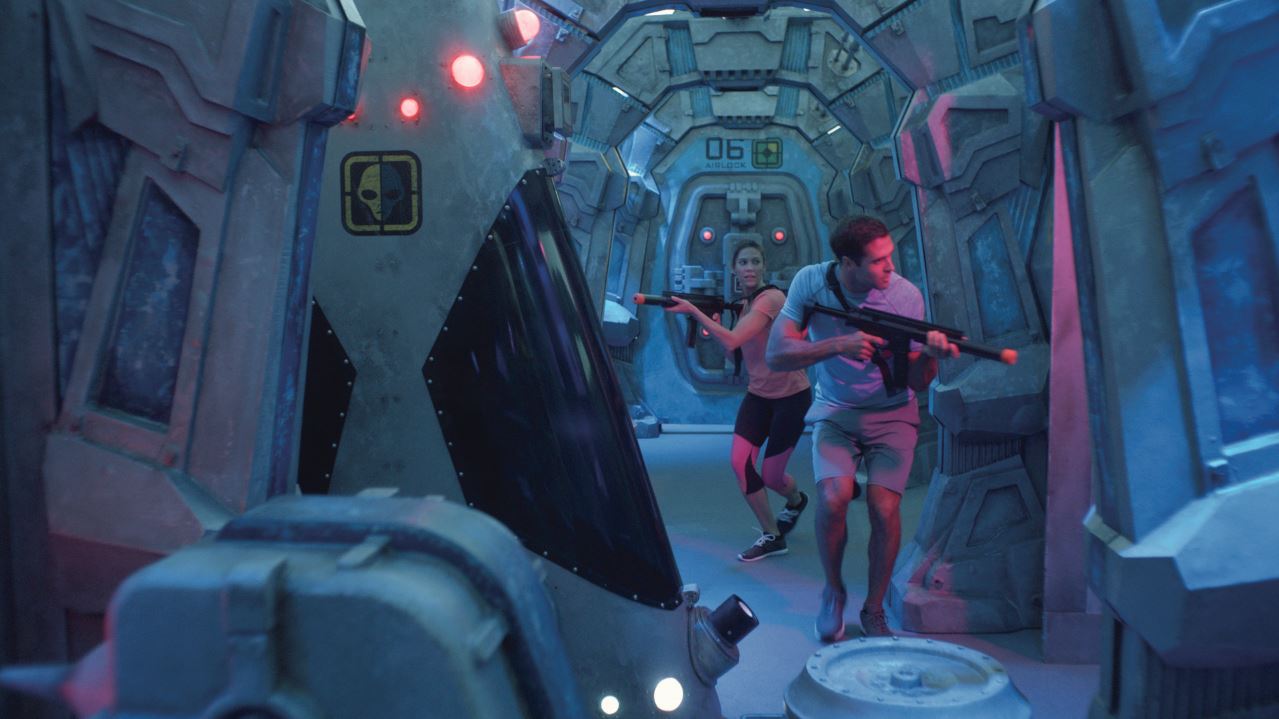 After working up a sweat, guests aboard Norwegian Bliss will be able to cool down at the ship’s expansive pool and sundeck featuring two spacious pools and six infinity hot tubs that scale the side of the ship. The ship’s Aqua Park will include two multi-story waterslides. The high-speed Ocean Loops free fall slide will include two loops, one that extends out over the side of the ship and a second see-through loop that stretches down to the deck below. The tandem Aqua Racer slide will allow guests to race side-by-side on inner tubes for more than 360 feet, with a translucent section that provides stunning ocean views. 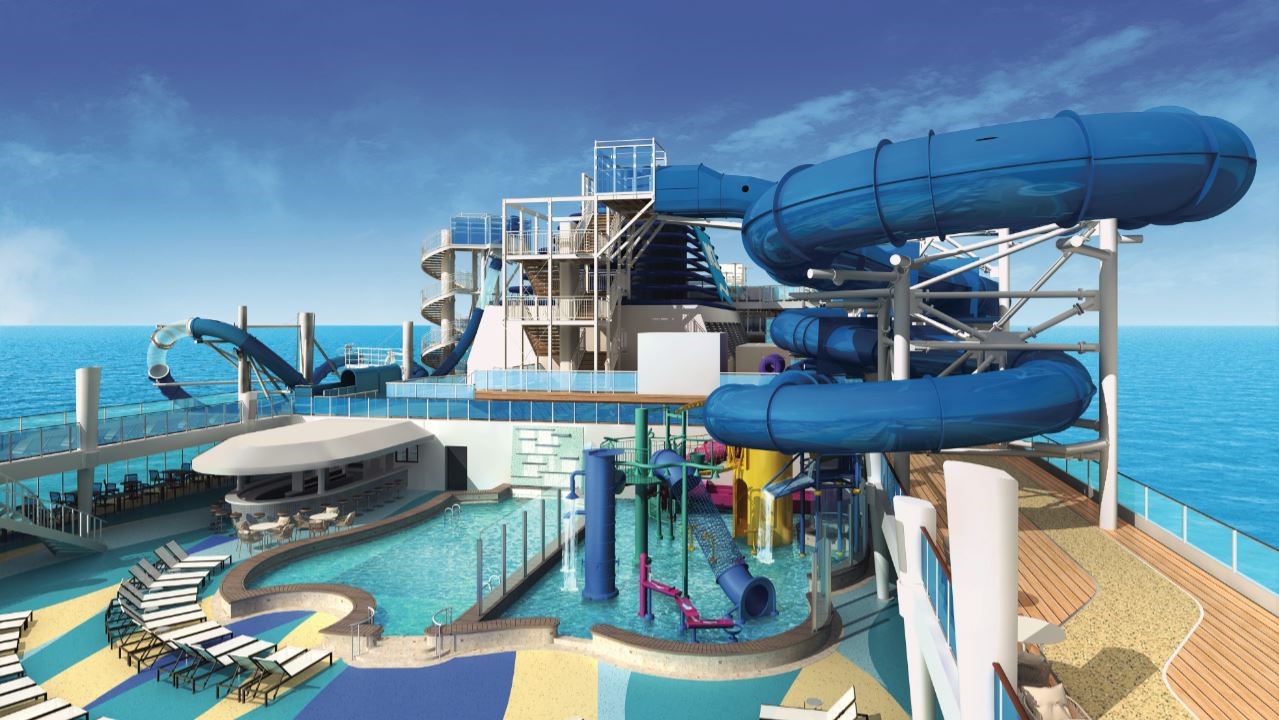 Junior cruisers will be abale to enjoy themselves at the Kids’ Aqua Park. Children aged three to 12 will also have a blast at Splash Academy, the fleet’s award-winning complimentary youth program. Teens aged 13 through 17 will enjoy Entourage, their own space adjacent to the Ship’s arcade. Even tiny cruisers, ages six months to just under three years old, will have a dedicated space with the fleet’s largest Guppies playroom. 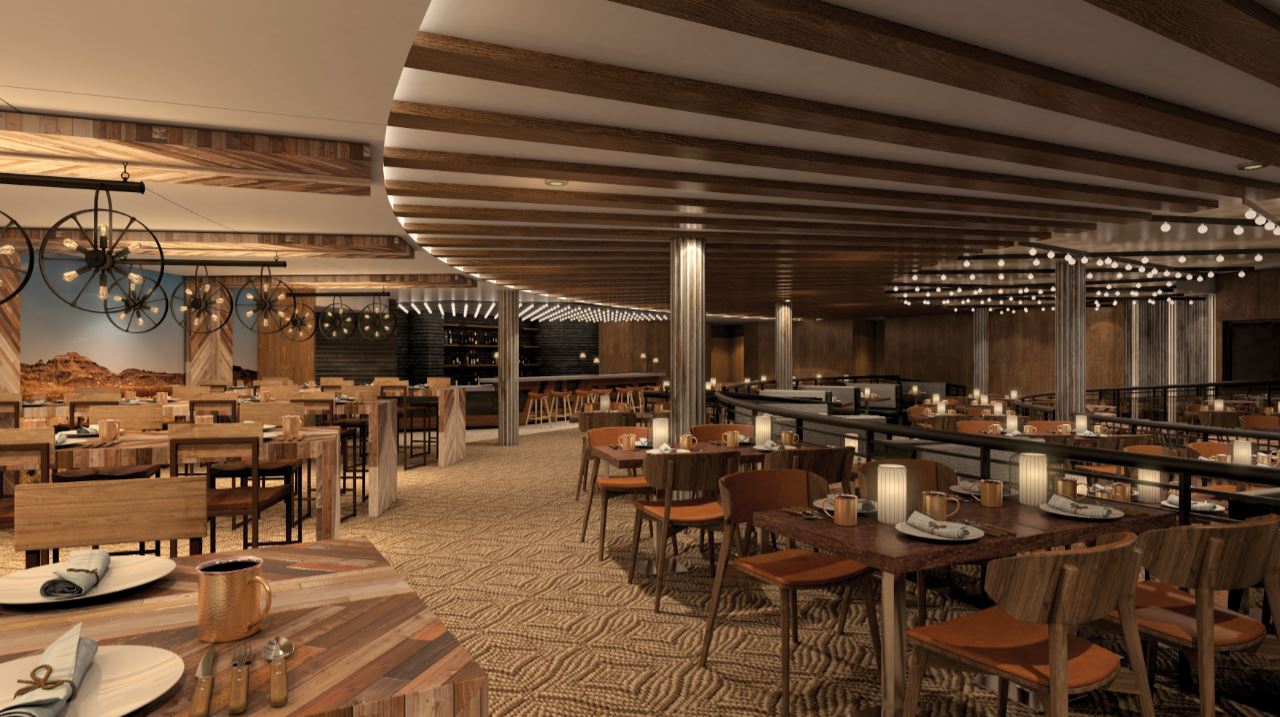 The flavours aboard Norwegian Bliss will travel south-of-the-border with Los Lobos, an outpost of the brand’s new restaurant serving elevated Mexican cuisine that made its debut in 2016 aboard Norwegian Dawn offering upscale, modern take on traditional favourites. 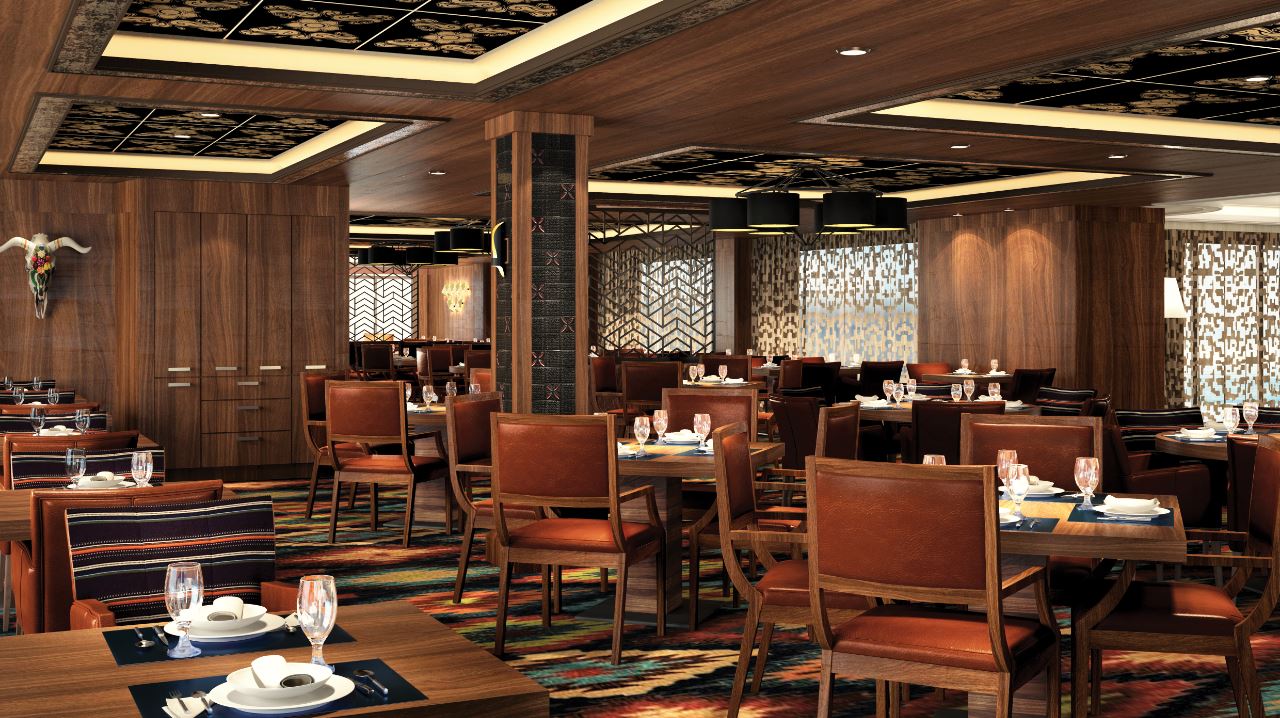 Sweets and treats will be served up day and night at Coco’s, a completely new à la carte dessert venue where liquid chocolate in an enclosed oversized chocolate fountain will adorn its entranceway. 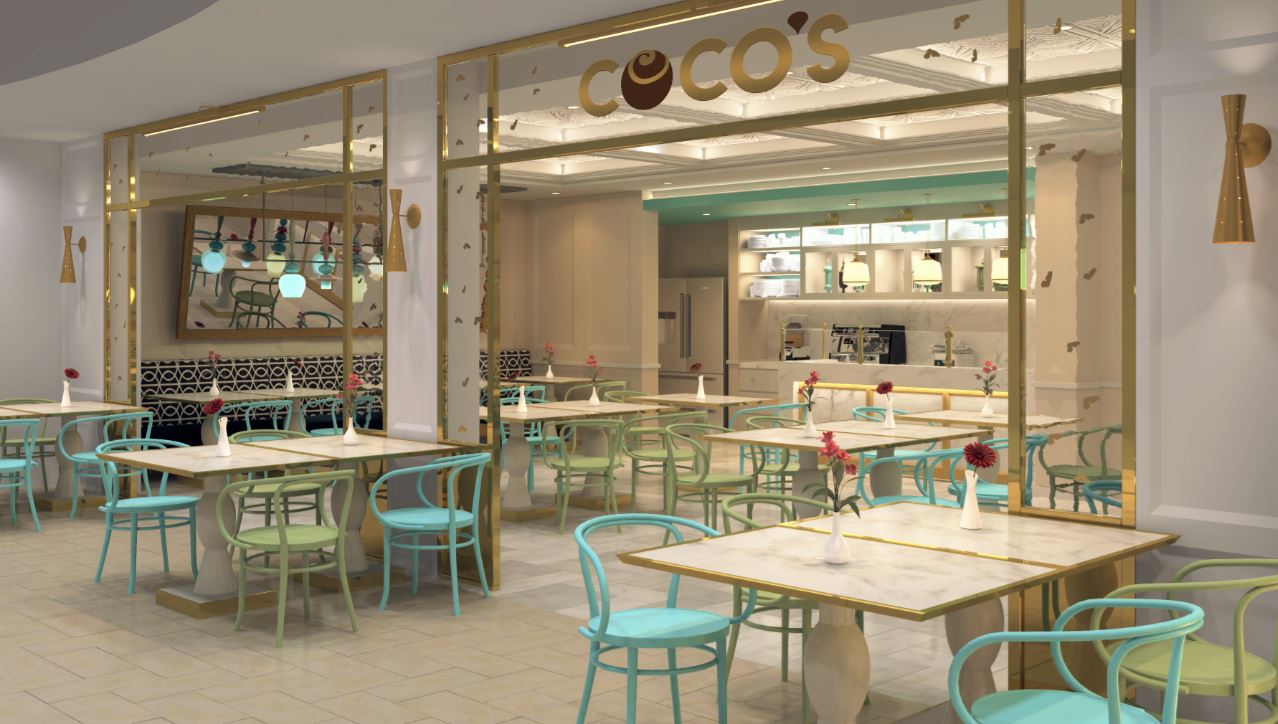 In a nod to the ship’s homeport of Seattle, guests will alsobenefit from a full service Starbucks store on board to fuel their day with flavour with Starbucks coffees, teas and bites available à la carte.

Signature à la carte restaurants will include French cuisine at Le Bistro, the tastes of Tuscany at La Cucina, the finest fresh seafood at Ocean Blue, global fusion cuisine featuring sushi, dumplings, handhelds and more at Food Republic. Cheeseburgers in Paradise at Jimmy Buffett’s Margaritaville at Sea, handmade cupcakes and macarons at The Bake Shop as well as the brand’s Japanese hibachi steakhouse Teppanyaki round up the offer of specialty restaurants.

In regards of complimentary dining Norwegian Bliss will serve up premium quality cuisine with fresh ingredients curated by the brand’s coveted culinary team. The new complimentary dining concept, The Local will offer guests pub fare in a relaxed neighbourhood atmosphere 24 hours a day. 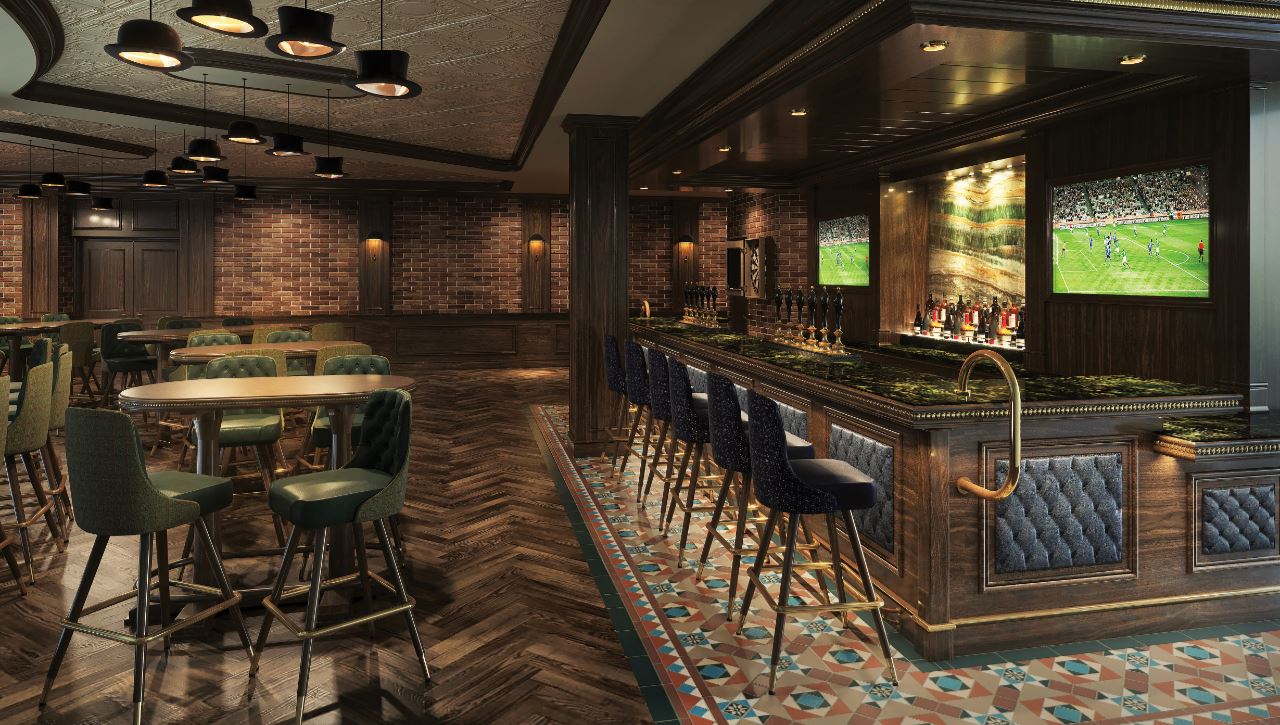 Norwegian’s original beverage concepts will round out the ship’s culinary offerings. The District Brew House  will serve 24 beers on tap and more than 50 bottled beers, with bites served from the adjacent Food Republic. The Cellars, A Michael Mondavi Family Wine Bar, will offer a curated wine list featuring 35 grape varietals and daily interactive educational seminars and tastings.

During her inaugural summer season, Norwegian Bliss will sail weekly seven-day Alaska cruises each Saturday from Pier 66 in Seattle. Unlike any other ship sailing the West coast, Norwegian Bliss will feature the brand’s most celebrated elements of freedom and flexibility including 678 Ocean Place, a three-deck central hub with restaurants, shops entertainment and guest services.  Also a first for a ship on the West coast will be The Waterfront, the popular feature that debuted on Norwegian Breakaway in 2013. The outdoor promenade is designed to enhance guests’ connection to the ocean with al fresco dining, bars and lounge spaces and will offer views of Alaska’s scenery and wildlife or the Caribbean’s turquoise waters. 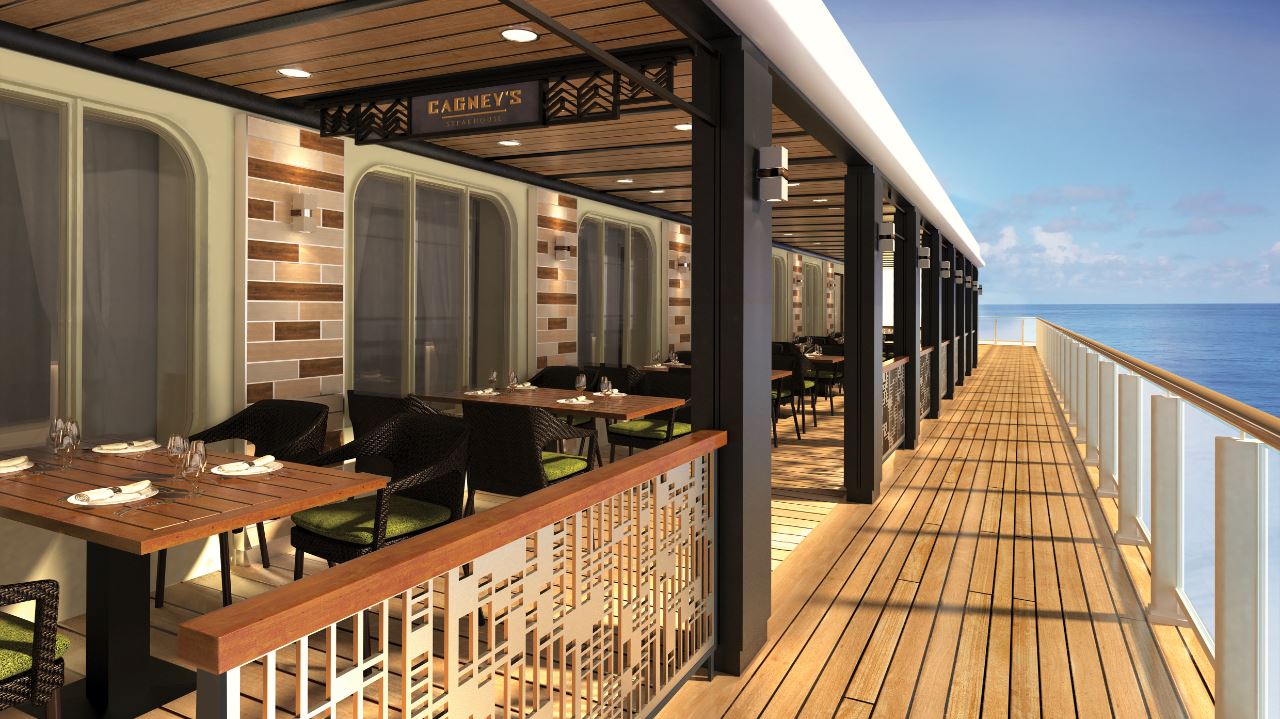 Norwegian Bliss’ custom design comes with a wide variety of accommodations including luxurious suites in The Haven by Norwegian, Studio staterooms for solo travelers with virtual ocean views, and new connecting staterooms ideal for large groups and families traveling together. You can Read more on the Bliss accommodations here. 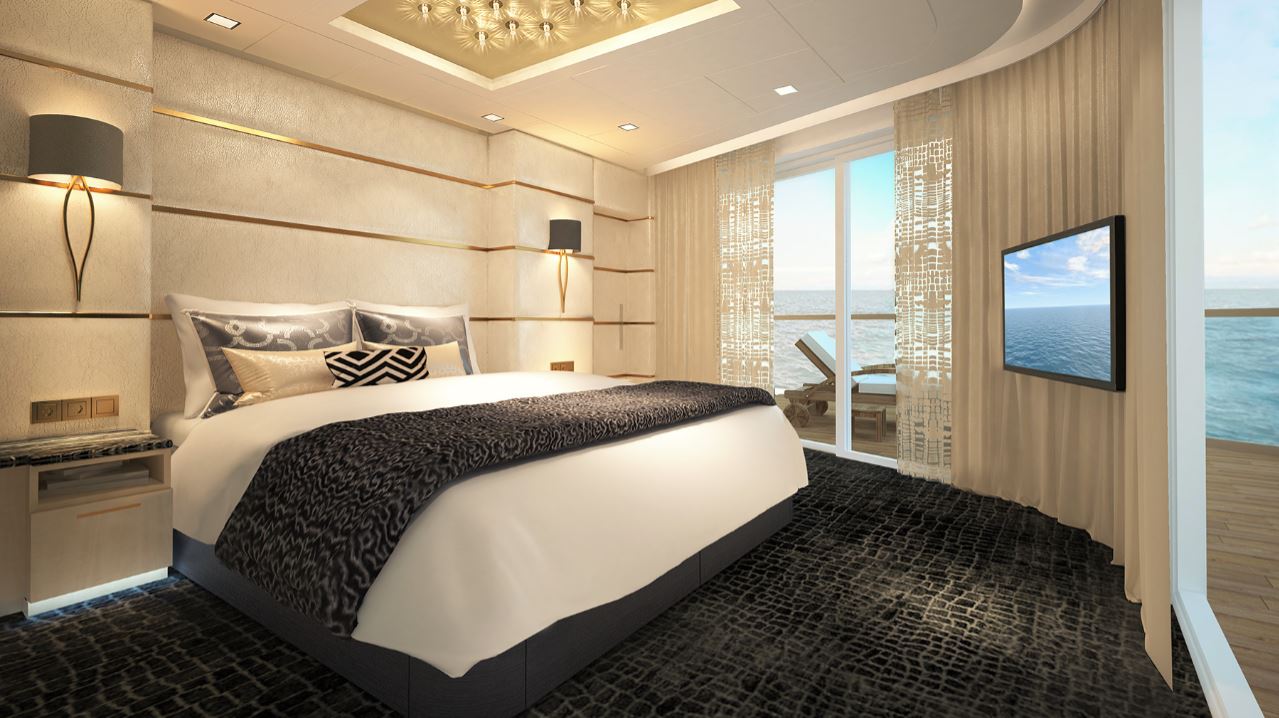 Announced a few months ago, Norwegian Bliss will also feature an incredible lineup of entertainment offerings including the Tony-Award winner for “Best Musical” Jersey Boys and two observation lounges, including the exclusive Horizon Lounge for guests of The Haven, perfect for whale watching in Alaska or taking in sunsets in the Caribbean.

Continuing its tradition of featuring original artwork on its ship’s hulls, Norwegian Cruise Line has commissioned Wyland, one of the world’s premier marine life artists, to design the hull art for Norwegian Bliss.