The name for Royal Caribbean‘s fourth Oasis Class cruise ship has yet to be officially announced by the cruise line, but it looks like the cat’s out of the bag as FlowRider, the company known for its surf simulators onboard Royal Caribbean’s cruise ships, accidentally revealed the name of the new Oasis Class ship.

The fourth Oasis Class cruise ship, which is currently under construction at the STX France shipyard in Saint-Nazaire,  has yet to be officially named by the cruise line, but in a blogpost on FlowRider’s website, entitled “Even More FlowRiders to Spread Across Royal Caribean’s Fleet” the author has revealed the name of the upcoming cruise giant.

In the article FlowRider is patting themself on the back as they have so far installed 16 surf simulators on Royal Caribbean ships, making Royal Caribbean their single largest client. The author continues: “We are currently in the midst of building FlowRider #’s 17 and 18 for Royal Caribbean Cruise Lines (RCCL).” 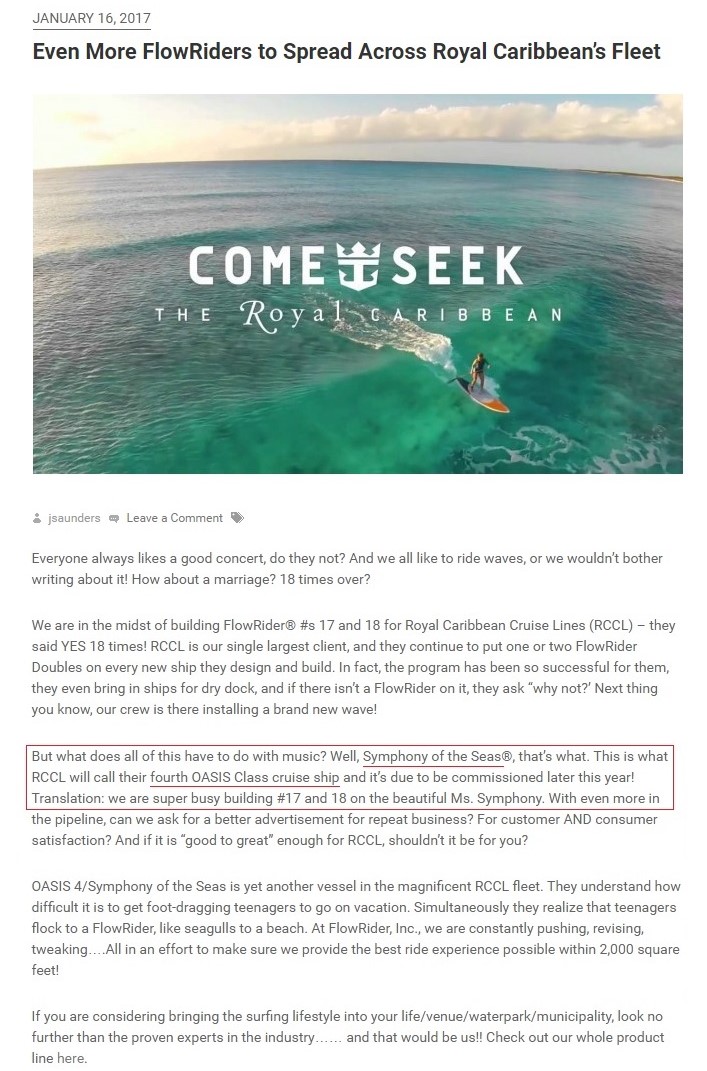 As the author began the article by making reference to a concert and riding waves, she goes on: “But what does all of this have to do with music? Well, Symphony of the Seas®… This is what RCCL will call their fourth OASIS Class cruise ship. Translation: we are super busy building #17 and 18 on the beautiful Ms. Symphony.“

In an attempt to promote themselves to potential customers FlowRider has succeeded in confirming a rumour that has been going around for some time now. And while Royal Caribbean probably isn’t to happy with the disclosure, I have to admit Symphony of the Seas sounds like music to my ears…