Cruising is all about experiencing new things, meeting new friends, exploring new places, gaining a few pounds (or kilo’s) and maybe having a cocktail or martini too many. But to be able to keep on doing that it’s important to get a good night’s sleep and that’s why choosing the right cabin is essential.

There are plenty of reasons why people choose a particular type of cabin. For us it mostly depends on the type of cruise we are booking. For a cruise loaded with seadays, a transatlantic crossing for example, we prefer to book a balcony cabin. For us there’s nothing like waking up, opening the sliding doors, stepping out on our own private balcony and enjoy the infinite ocean while having breakfast. During the day we like to just sit outside, read a book, fill out a sudoku or just relax and take a nap or soak up some sun in the calm and privacy of our balcony.

The choice in cabin type can also be influenced by the price of a cruise. For this cruise on Rhapsody of the Seas for instance, ocean view cabins were double the price, and balcony cabins triple the price of inside cabins.

They say size isn’t everything, but when it comes to the size of a cabin on a cruise ship it could make a big difference in your cruise experience.

Therefore the size of the cabin also plays a part in choosing the right cabin. Part from the large suites, we noticed that the difference in cabin size on this ship was relative, as inside, oceanview and balcony cabins on average had the same size. The higher price for a balcony was due to the limited amount of balcony cabins on the ship.

Taking all this into consideration we decided that by giving up our outside view and booking an inside stateroom we would save enough money to pay another cruise for one of us, therefore booking an inside cabin was an easy choice.

Having made up our minds on the type of cabin, our next point of consideration was the location of the cabin. On a previous cruise we noticed that people tended to walk, and especially talk, through the corridors on the decks where the gangway was located. Not wanting to be woken when people walked by at 7.30 in the morning , we started looking for a cabin on the higher decks. Unfortunately the only cabins that were being offered were on deck two or three. Eventually some cabins that were located behind the inside cabins became available.

We stayed in cabin 3449 which is located in the middle of the ship in a separate interior corridor. As literally nobody (part from the guests staying in the 11 cabins) needed to pass through there, and I’m pretty sure a lot of people didn’t even know there was a second corridor with staterooms, it was an absolutely quiet location.

Royal Caribbean marks the cabin as a large interior stateroom, measuring 142 sq.ft. or 13m², with twin beds that convert to a Royal King, measuring 72.5 inches wide by 82 inches long (180cm by 208cm). As you can see from the pictures the room has a vanity area, a small couch and a private bathroom. 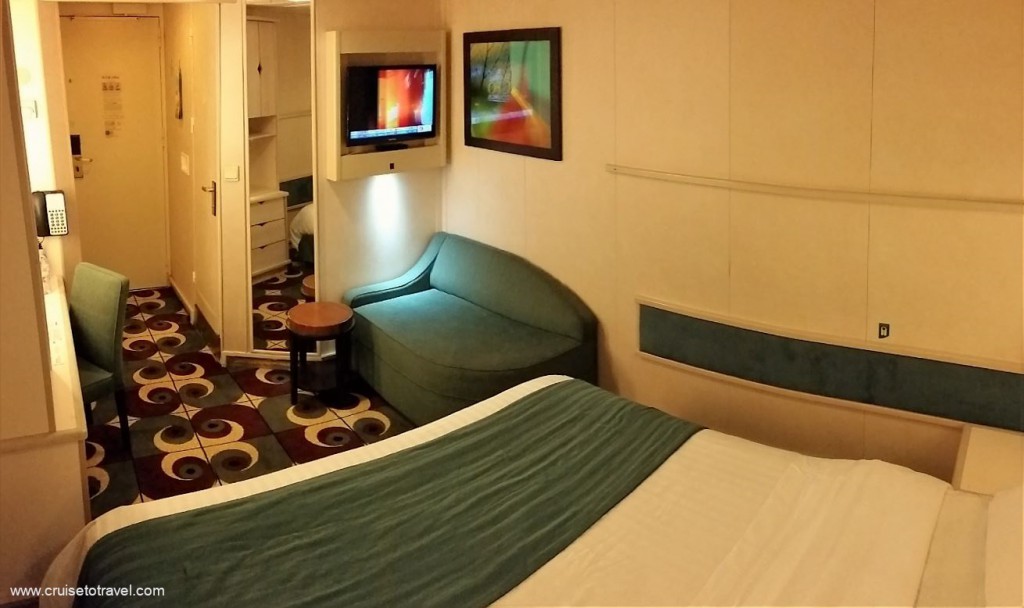 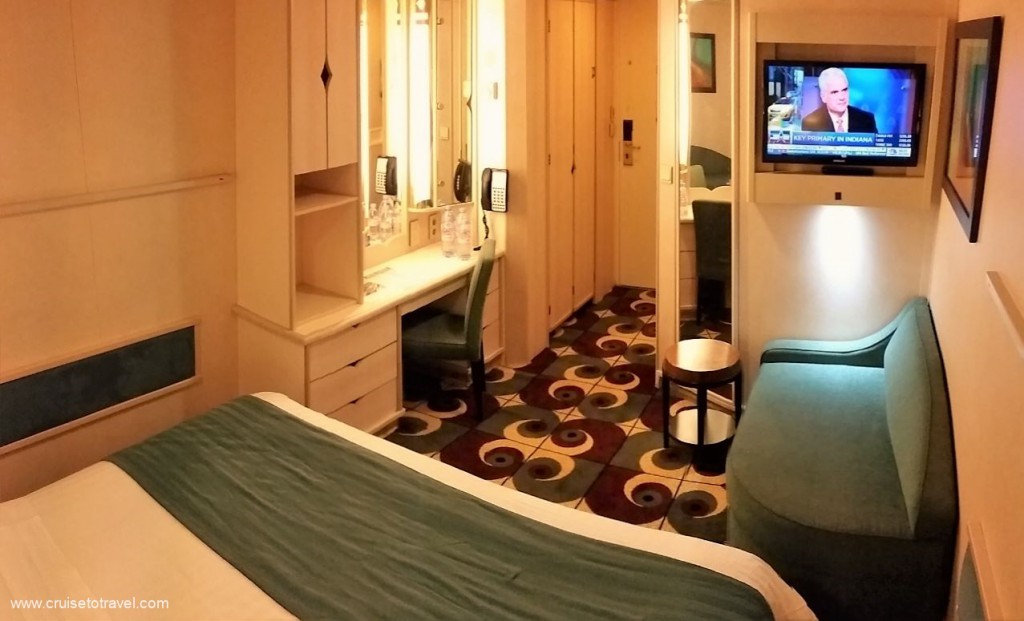 A week before our cruise Rhapsody of the Seas was hit by a freak wave, causing some windows to crack and flooding some cabins. So when we saw the brand new carpet in our cabin we knew our room was one of the cabins that were affected by the flooding. We later noticed that there were quite a few cabins with different carpeting as the ship did not have enough carpet in stock to refurbish all the affected cabins with the original carpet. Whileour cabin now had the carpet from Chops Grille, the specialty steakhouse, other cabins had the carpet from the Windjammer Café. Can you imagine sleeping in the buffet… 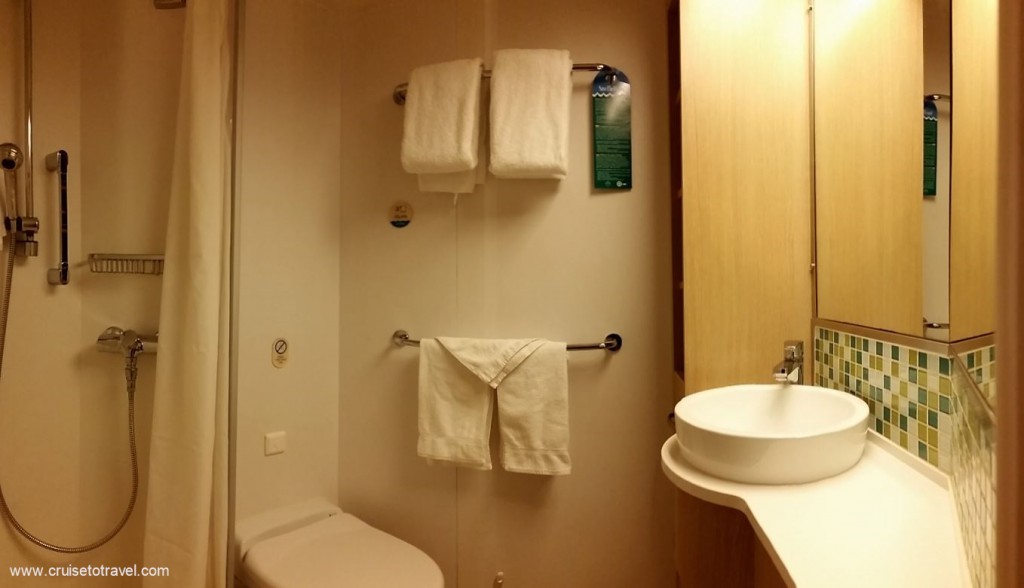 Though we are not really used to staying in an interior cabin, we can honestly say it didn’t bother us one moment. In fact we decided that in the future we should consider booking an inside stateroom more often (and save some money). The location meant the room was quiet and, even in rougher seas, we could hardly feel any motion. The only times we missed our outside view was in the morning, but with one quick look at the ship’s camera on the TV we could see what the outside world looked like.