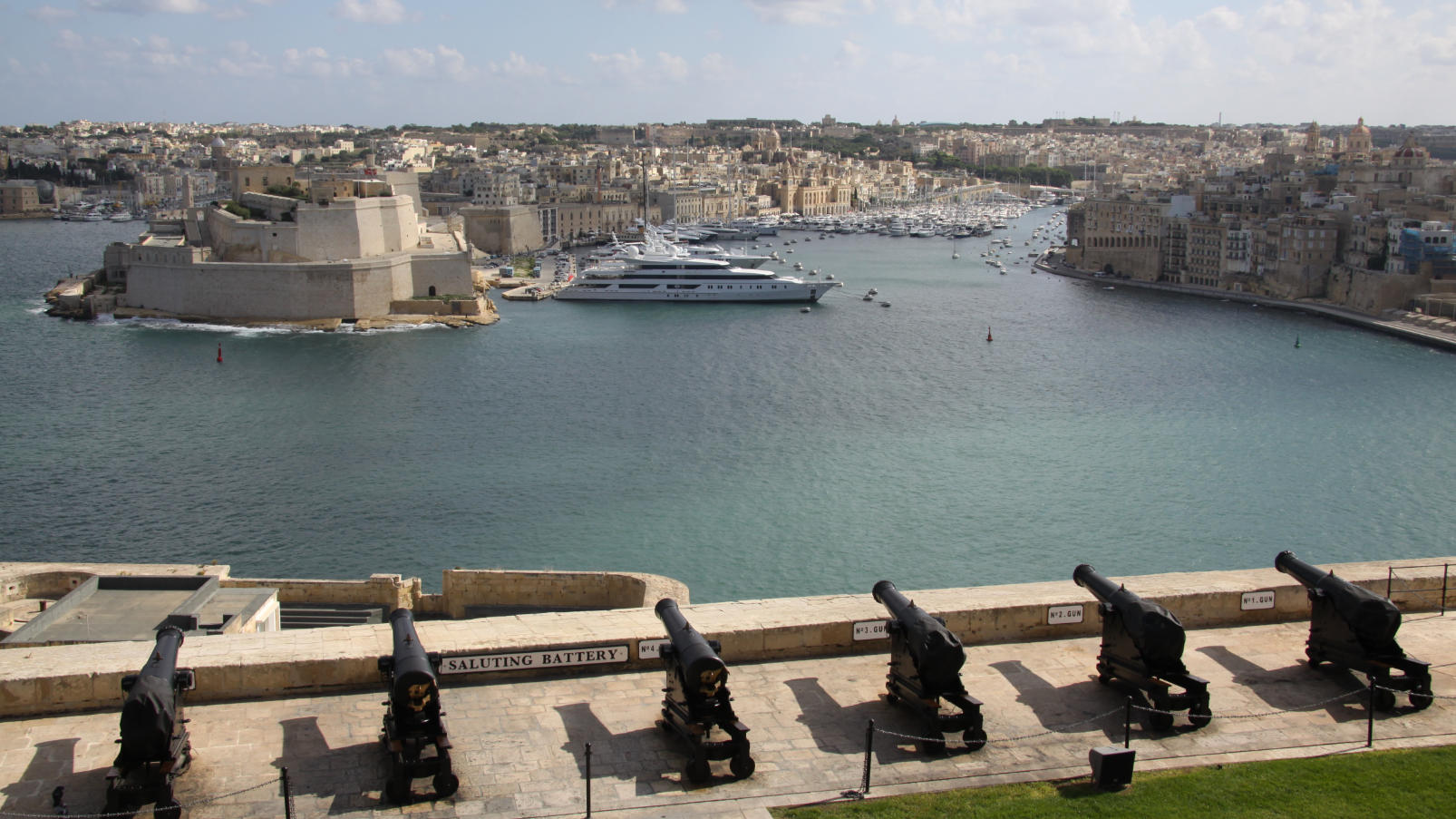 For years the Maltese Islands were under constant threat from the Ottoman Turks. When the Ottomans carried out an audacious raid on Gozo, captured the population and took them into slavery the Knights of the Hospital of Saint John of Jerusalem  responded with a disastrous attack on Djerba, the Ottoman stronghold on the coast of Tunesia.

Despite the harbours and two forts, St. Angelo and St. Elmo, the Knights knew they were vulnerable in Malta. Grand Master La Valette did his best to build defences and requested extra forces from the Emperor Charles V, the Pope and the Viceroy of Sicily. But no help came and in May 1565, a vast Ottoman fleet of 40,000 men, lay siege to the Islands. Though heavily outnumbered, with a mere 700 men and 8000 Maltese regular troops, the Knights succeeded in holding the Ottomans off for four weeks.

The Great Siege ended on 8 September 1565 and is commemorated with a public holiday – il-Vitorja. After the Siege the Knights of St. John decided to build a city both as a fortress to defend Christendom and as a cultural masterpiece.

Starting in 1566 it took workers only 15 years to build the impressive bastions, forts and cathedral, by hand and without the use of any mechanical tools, that would become Valletta.

Despite only measuring 900 metres by 630 metres, Valletta boasts over 25 churches – a clear testament to the centuries-old Catholic faith of the Maltese. In fact, the first building that went up in the city is the Church of Our Lady of Victories along South Street, which commemorates the lifting of the Great Siege.

According to tradition, Christianity was brought to the Islands by none other than the Apostle Paul himself in around A.D. 60. Paul was being taken to Rome to be tried as a political rebel, but the ship carrying him and some 274 others was caught in a violent storm only to be wrecked two weeks later on the Maltese coast. For this reason the Collegiate Parish Church of Saint Paul’s Shipwreck is considered one of the most important churches in the city.

Valletta’s, and possibly Malta’s most famous church is St. John’s Co-Cathedral, located just off Republic Street in the centre of the city. It was built by the Maltese architect Glormu Cassar for the Knights of St John between 1573 and 1578 and is known for its stunning interior, typical of the high-Baroque period. The church is richly decorated with paintings, sculptures, and tapestries by famous artists such as Caravaggio (The Beheading of Saint John the Baptist) and  Mattia Preti. The marble floor bears the tombstones of 375 Knights and Officers of the Order of Malta. Jean Parisot de Valette is buried in the crypt. The Cathedral features eight chapels dedicated to the different Langues of the Order of St John. 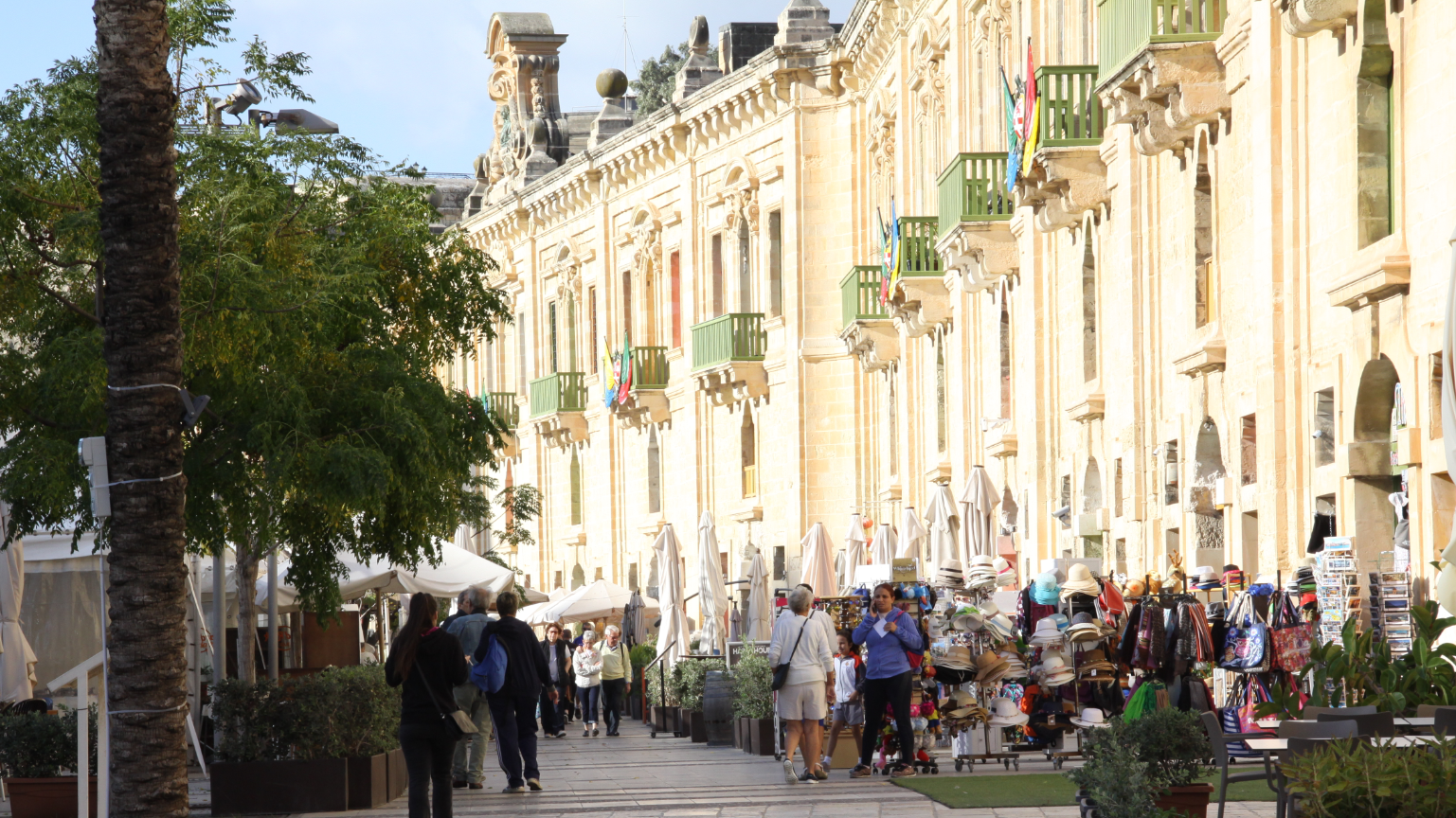 With many of the well-known international brands located on Republic and Merchants Street and small independent boutiques in the side streets, Malta offers numerous and diverse shopping opportunities guaranteed to satisfy the casual buyer as well as the serious shopaholic.

While the capital’s daily market in Merchant’s street is the ideal place to grab a deal, on Sundays the Il-Monti market is the place to be for bargain hunters. Here you can find local souvenirs, typical Maltese snacks and other bric-a-brac items that you didn’t know you needed.

Looking to combine some history and fun? Then head out to the Valletta Waterfront. Nineteen historical 250-year old warehouses, where the Knights of St. John and European merchants used to unload their goods, have been majestically restored and provide a colourful mix of retail, dining and leisure experiences. 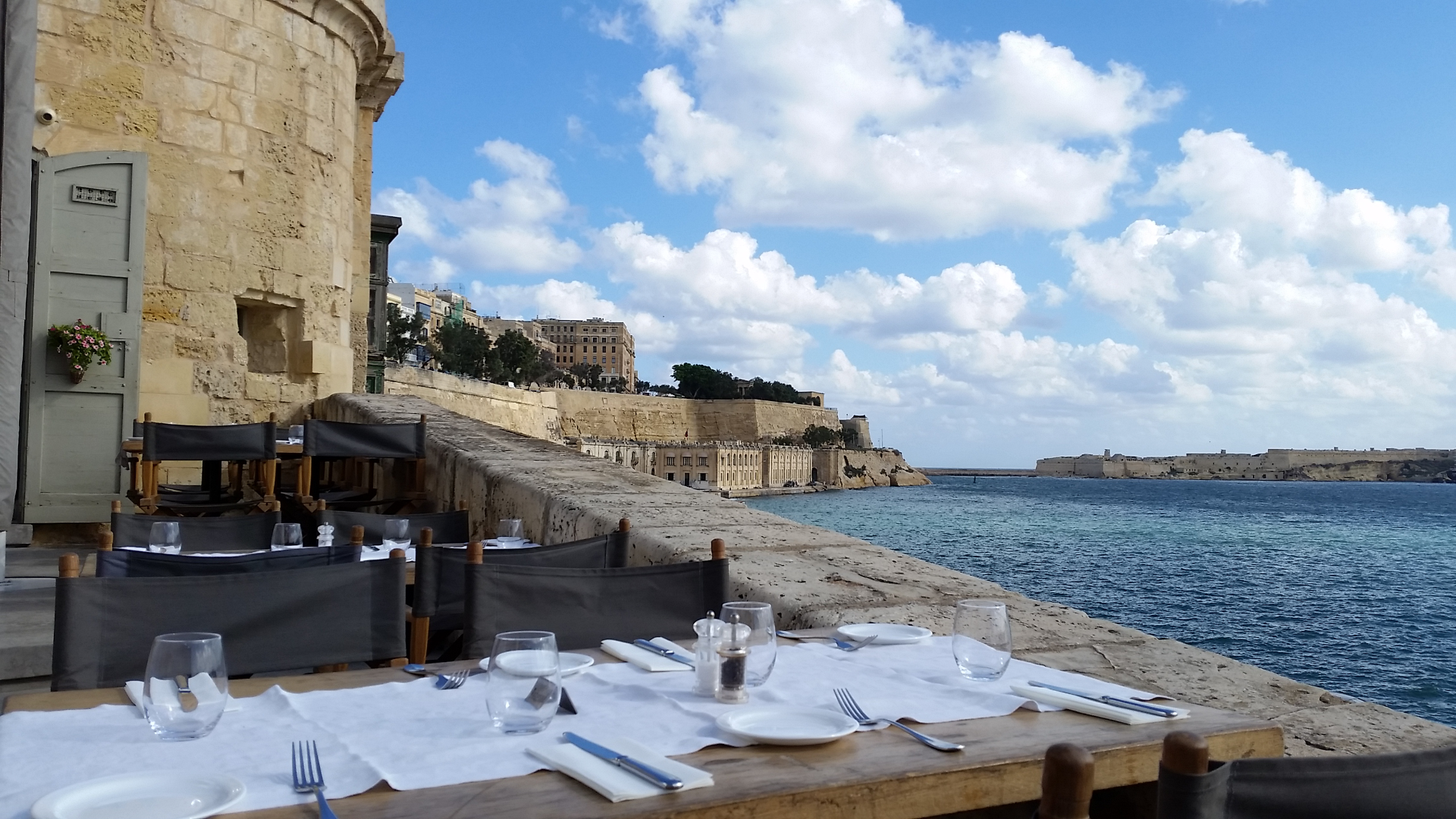 Maltese cuisine offers an eclectic mix of Mediterranean cooking and although the restaurant scene is a mix of speciality restaurants, there are many eateries that offer or specialise in local fare, serving their own versions of specialities.

Inspired by the Mercado di San Miguel in Madrid and the Boqueria market in Barcelona, the recently reopened Valletta indoor market, known as the Suq tal-Belt and located on Merchants Street, offers a variety of restaurants, stalls and a small food market.

We tried some of the local dishes – with a modern twist and French influences – at The Harbour Club.

Located in a converted warehouse that was built by the 64th Grand Master of the Order of Malta in 1712, The Harbour Club offers a unique dining experience. Indoors, you will find a cosy interior decorated with a recycled deck of an American ship. On the terrace, you will have the stunning view of the Grand Harbour and Fort St. Angelo.

Malta’s climate is typical of the Mediterranean and with a daily average of around 12 hours of sunshine in summer and 5 to 6 hours in mid-winter its is the perfect destination to enjoy an eternal summer.

While Summers are hot, dry and very sunny, spring and autumn are slightly cooler, except when the occasional Scirocco wind from Africa brings unseasonally high temperatures and humidity. Swimming in the sea is quite possible well into the ‘winter’ months, and the peak beach season can last until mid- to late October.  Winters are mild, with the occasional short cold spells brought about by the north and north-easterly winds from central Europe. Annual rainfall is low, averaging 568mm a year (compared to Brussels with more than 800mm). 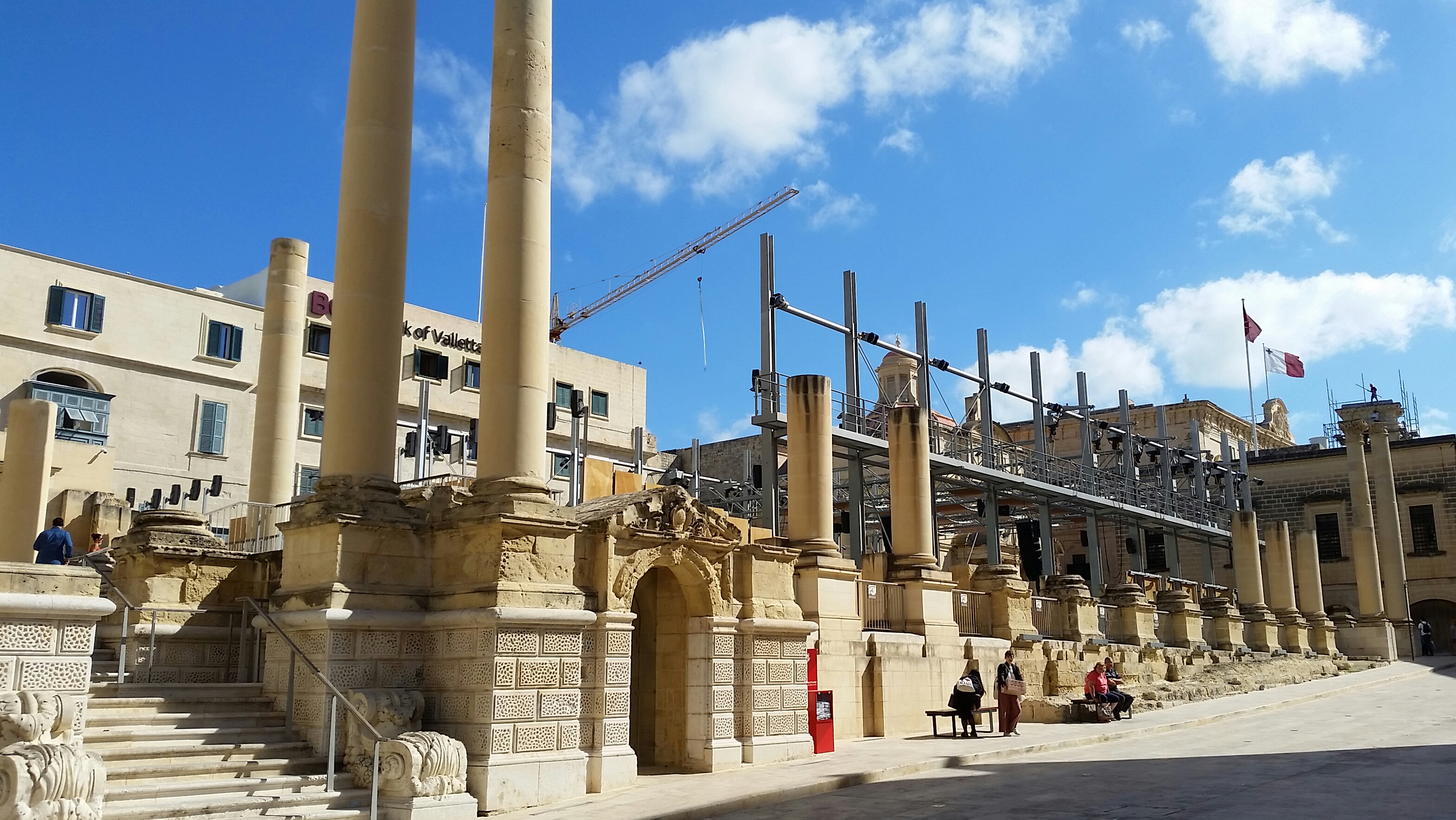 This year Valletta, together with the Dutch city of Leeuwarden, is hosting the title of European Capital of Culture.

The programme for Valletta’s year as Capital of Culture aims to encourage artists and audiences to rethink the traditional view of culture. Due to Malta’s specific location as an island-state between Europe and North Africa, the programme aspires to bring together different points of view from the various shores of the Mediterranean. In total more than 140 projects and 400 events are organised around three main themes: “Island Stories”, “Future Baroque” and “Voyages”. About 1,000 local and international artists, curators, performers, workshop leaders, writers, designers, choirs and film-makers are involved in the celebrations which will continue throughout the year across the islands of Malta and Gozo.

For more information on the events visit www.valletta2018.org