Royal Caribbean International’s Oasis-class ships, Oasis of the Seas, Allure of the Seas and the new Harmony of the Seas, struck a chord today, greeting each other at sea for the first and possibly only time. In a meeting of unprecedented proportions, the three record-breaking sisters came together to celebrate the U.S. arrival of Harmony of the Seas on the eve of the ship’s debut in her new permanent homeport of Port Everglades in Fort Lauderdale, Florida.

The Oasis-class ships are architectural and engineering marvels, boasting industry-changing and unexpected onboard experiences. Each ship features seven themed neighborhoods and a number of spectacular features, adventures and thrills, including the lush and tranquil Central Park with nearly 12,000 plants and trees, FlowRider surf simulators, a thrilling zip line 82 foot long that races guests nine-decks in the air, luxurious multi-level loft suites with expansive floor-to-ceiling windows, the outdoor AquaTheater that hosts dazzling high-diving, aquatic and acrobatic performances, a Boardwalk with a hand-carved carousel, and The Rising Tide Bar, the first moving bar at sea. 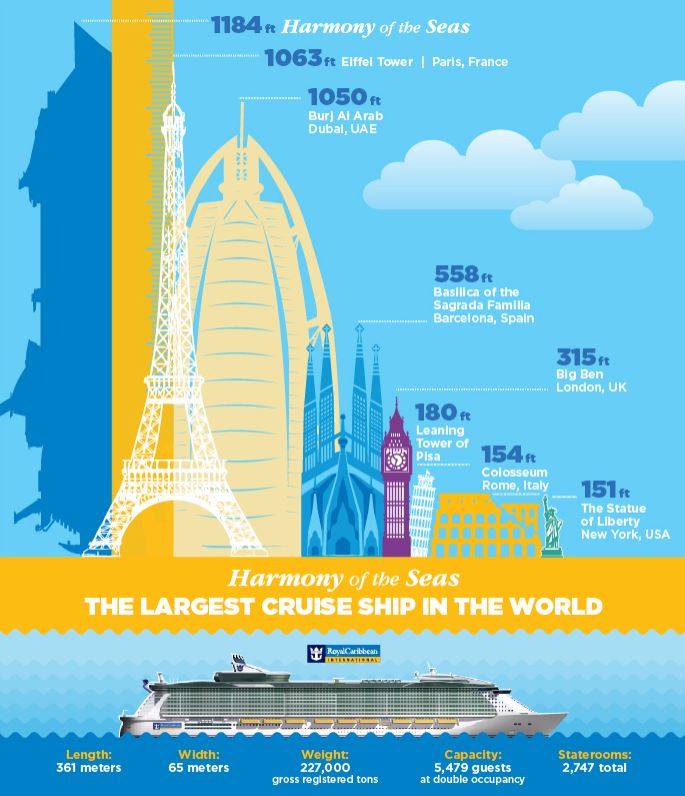 The newest and youngest of the three ships, Harmony of the Seas, officially claimed the title of world’s largest cruise ship, beating her sisters by a mere foot in length and nearly 1,700 gross registered tons. The ship features a bold lineup of new thrilling experiences, imaginative dining, unparalleled entertainment and the latest technology, including VOOM, the fastest internet at sea. Harmony combines the iconic seven neighborhood concept with some of the most modern and groundbreaking amenities and offerings that will appeal to guests of all ages. From The Ultimate Abyss, a dramatic 10-story tall slide, to unparalleled entertainment including Broadway’s hit musical Grease, sophisticated dining in venues ranging from Jamie’s Italian Cuisine by celebrity chef Jamie Oliver to Royal Caribbean’s whimsical restaurant Wonderland, which is a unique culinary adventure for the senses, and robot bartenders, there is an adventure for everyone onboard Harmony of the Seas.