This week Royal Caribbean announced their 2017 European cruise schedule. No less than eight ships will offer guests the opportunity to enjoy the European summer while exploring some of Europe’s most iconic destinations.

Jewel of the Seas will sail from Italy on seven- and nine-night voyages visiting Greece and Turkey, as well as seven-night sailings through the Western Mediterranean visiting France, Spain and Italy. Among the ports-of-call will be Santorini, the Greek capital city of Athens, Turkey’s ancient town of Ephesus, the Italian capital Rome and the floating city of Venice.

Both departing from Barcelona, Freedom of the Seas will host guests on seven-night sailings through the Western Mediterranean, while Brilliance of the Seas navigates eight European destinations with a 12-night itinerary. Both ships will have stops in Naples, Rome and Pisa/florence. With stops in Nice and Marseille, Freedom of the Seas will give passengeres the opportunity to explore the South of France. Guests sailing on Brilliance of the Seas can wonder through the narrow streets and canals of Venice and discover the Acropolis of Athens.

In 2017 we’ll see Independence of the Seas and Navigator of the Seas return to Southampton, England. With itineraries that extend from 7 to 14 nights guests can voyage to the Mediterranean and the Spanish Canary Islands. Passengers will get the opportunity to have a sense of the French Riviera while stopping in the city of Nice and get a taste of North Africa in Morocco,  while a stop in the resort town of Agadir will grant visitors a relaxed day on the far eastern shores of the Atlantic Ocean.

Serenade of the Seas and Vision of the Seas will head to northern Europe. Stops include Tromso (Norway), located north of the Arctic Circle offering seasonal views of the Northern Lights and Midnight Sun; sightseeing in the Swedish capital of Stockholm and Copenhagen, the capitol of Denmark, famous for it’s Little Mermaid statue.

Legend of the Seas will return from her season down under to sail the Adriatic Sea from Venice. The cities of Athens (Greece), Ephesus (Turkey) and Dubrovnik (Croatia) are among the many ports-of-call. 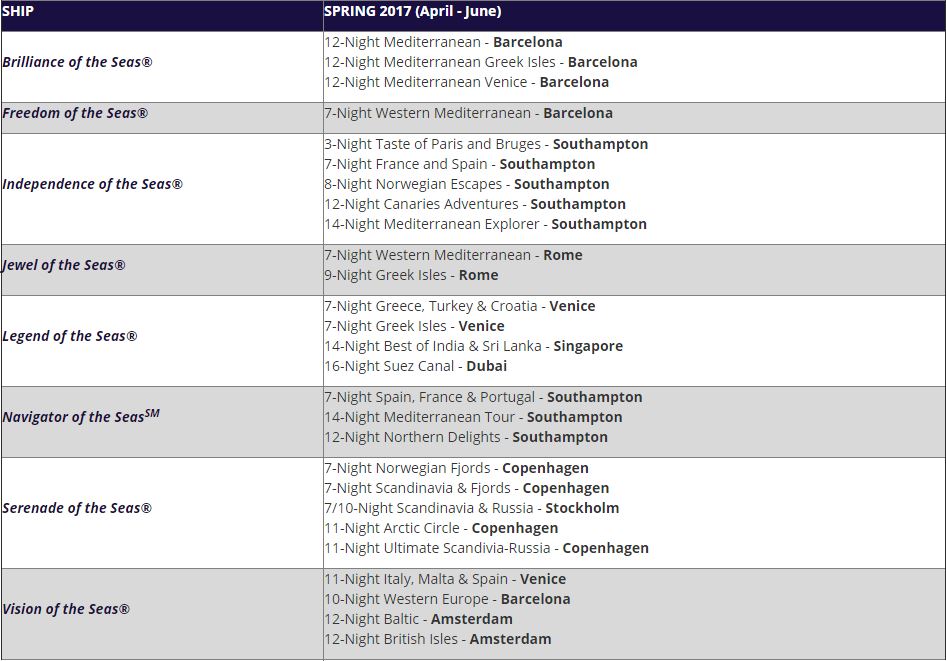 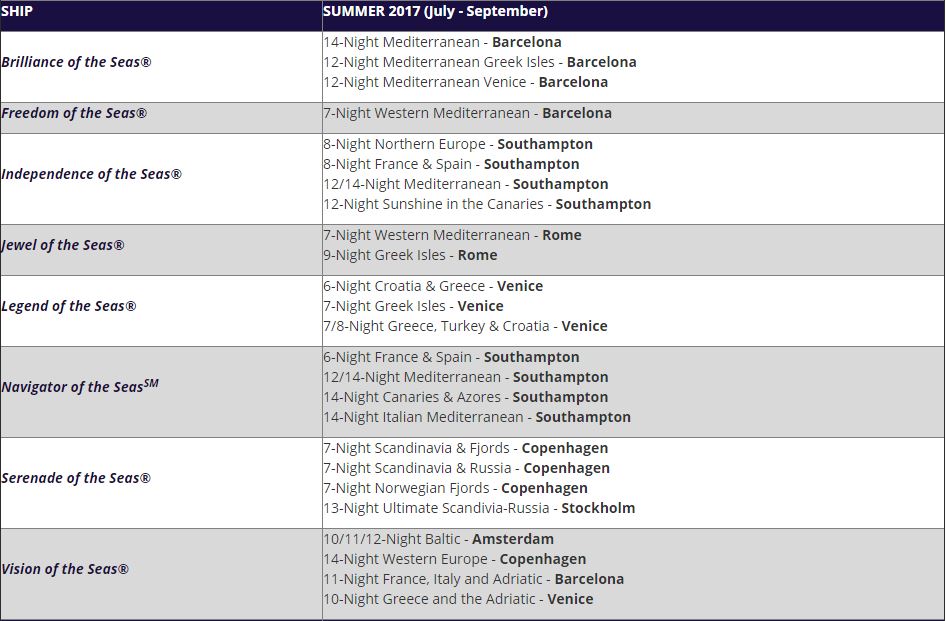